Yan Yikuan on Marriage: “You Can’t Stop Dating After You Marry” 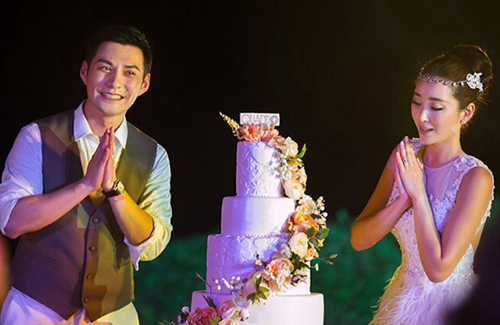 Having dated since 2009, Yan Yikuan and Sunny became officially engaged in April 2013, when the actor proposed after watching her perform in the stage play, 21 Carat < 21克拉>. For the lovebirds, 21 Carat seemed like it had been custom-made to reflect their romance, and Sunny admitted that she had decided to act in the play in order to commemorate their love. Later that year, the couple registered their marriage and followed up with a glamorous wedding ceremony in March 2014.

For both Yikuan and Sunny, marriage has drastically changed their preconceptions about love. Previously, Yikuan held a more pessimistic attitude toward love, thinking that it would be extremely difficult to find someone who really understood him. Moreover, he tended to shy away from giving his partner all of his heart, which led to much indecisiveness and loneliness.

After marriage, however, Yikuan has become more open with his love, and he rejects the common saying that marriage is the tomb of love. “We should think of marriage as the beginning of love,” he said. “You can’t stop dating after you marry.”

Similarly, Sunny used to see love as a typical fairy-tale romance. “I thought love was like the story of a princess and a prince,” she mused. “It was selfless and incorruptible, always full of laughter.”

Though marriage has shown her that love has its difficulties as well, Sunny learned that the presence of obstacles does not mean their love is any less perfect. “Even if two people are deeply in love, there will still be conflicts and times when they get angry and fight,” she explained. “At those times, it doesn’t mean they don’t love one another anymore.”

To illustrate her current view of love, Sunny brought up an example from The Little Prince, a French novella by Antoine de Saint-Exupéry: “The little prince grew a rose. Perhaps this rose is the same as a thousand million other roses, and there is nothing special about it. But after growing it, it stands out from the rest, because it is your rose.”

5 comments to Yan Yikuan on Marriage: “You Can’t Stop Dating After You Marry”