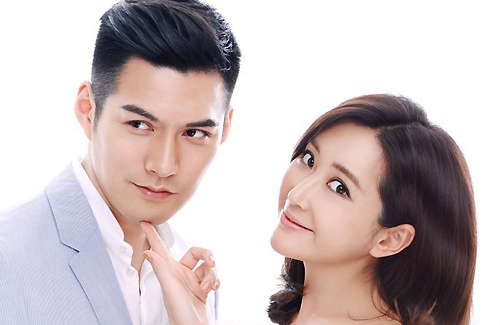 On April 7, mainland Chinese actor Yan Kuan (嚴寬) proposed to Sunny Du (杜若溪), who is his girlfriend of four years and also costar in the TV drama Love Love <戀了愛了>, before an audience of 500 people.

On the night of the proposal, Sunny had just finished a performance of the stage play 21 Carat <21克拉> at the Shanghai Drama Art Center. During the final curtain call, Yan Kuan stepped on stage with a bouquet of flowers, immediately causing the audience to begin shouting. At first, many of them thought he was merely demonstrating his support of Sunny, but the noise became deafening once they realized it was a marriage proposal.

Yan Kuan first thanked the audience members, news media, and the play’s cast and crew for staying to witness “the most important course of events of [his] life.” After a quick pause, he turned to face Sunny and said, “Do you know how fast my heart is beating right now? I’ve been acting for so many years, and now I’ve finally rediscovered that initial feeling.”

At that point, the song “Quietly” (靜靜的), by Harlem Yu (庾澄慶), began playing, and Yan Kuan became choked with emotions as he continued speaking. “I know that I am not a perfect person, and that I often make you unhappy. Sunny, you are a girl who goes all out. Just like two days ago, when I came to Shanghai to see you and discovered that your knees were all injured. I hope that I will always be able to look after you.”

Both Sunny and the members of the audience began tearing up at Yan Kuan’s words, which is when he decided to pull out an enormous plastic diamond ring, saying, “I searched all over Shanghai to find such a big 21-carat ring.” He also added that the ring would flash if plugged into an electric source. In response, Sunny joked, “Is that all?”

Yan Kuan then took out a ring box, got down on one knee, and confessed, “I couldn’t afford a 21-carat diamond ring, nor did I want to buy a small 0.21-carat one. So I chose a 2.1-carat one. I hope that you will accept it, but of course the most important thing is [that you accept] the truest me, with the 21-carat soul.” Sunny teasingly replied, “Kneel for a little bit more.” While Yan Kuan willingly endured her teasing, the audience shouted words of encouragement. In the end, Sunny accepted his proposal, and Yan Kuan put the ring on her finger.

During an interview after the proposal, Yan Kuan shared that he has been thinking about the proposal for half a year but was unable to find a suitable occasion. “Since we were already dating for four years, I ought to give her a lifelong promise. It wasn’t until she acted in 21 Carat that I found inspiration. She told me she accepted this play because of me, since she thought I was a lot like the male lead, so I felt that the time was right.”

Yan Kuan found it extremely exhausting to keep the proposal a secret from Sunny. “I had to communicate with the stage play group very stealthily, and I hoped that the media would keep it a secret when they came to witness it. Also, I had to come to Shanghai early without raising her suspicions.”

Sunny said she was overwhelmed by the consideration he had put into the proposal. For instance, Yan Kuan chose the date of April 7, because 4 plus 7 equals 11, which means “two people together for life.” He also sent her roses in seven different colors to express his hope that she would live a multi-colored life, every day of the week. “Although girls will always fantasize about proposals,” Sunny said, “I never actually thought it would be like this.”

Sunny also praised Yan Kuan for being dependable and for romancing her with the small details in life. She shared that when they were filming together, he would arrange with the crew to film his scenes first, because he knew that she liked having a lie-in. He would also prepare breakfast for her.

During the interview, Yan Kuan admitted that he’d been a little nervous about the proposal because the two of them had gotten into a little argument just that afternoon. “At the time, we were filming an MV, and we got a little angry because of a detail in the dance movements. Suddenly, I realized that tonight was the proposal and became a little worried.” Nevertheless, Sunny said the argument had lasted for only half an hour at most.

When asked about their wedding, the couple said they hoped it would take place as soon as possible, but urged everyone not to worry, saying, “The proposal was successful – will the wedding be far from now?”