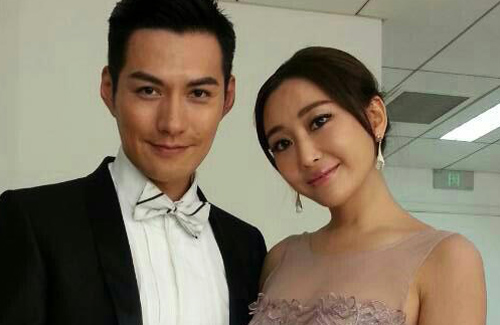 Mainland Chinese actor Yan Kuan (嚴寬) and his actress fiancée Sunny Du (杜若溪) officially registered their marriage a few days before Chinese Valentine’s Day, which takes place on the seventh day of the seventh month in the lunar calendar.

Yan Kuan posted a photo of his and Sunny’s marriage certificate on his Sina Weibo account. He also included a declaration of love, which read, “I love her! Until forever. Will protect her, and will never let her become hurt again.”

Sunny later forwarded his post to her own Weibo and added, “This Chinese Valentine’s Day surprise really alarmed me today. We have received everyone’s blessings. Thank you!”

Yan Kuan and Sunny have been a couple for four years and collaborated in the TV dramas Love Love <戀了愛了>, which aired in March of this year, and Girlfriend’s Lover <閨中密友>, which was broadcast in June. The two became engaged in early April, when Yan Kuan proposed to Sunny after she finished performing in a stage play at the Shanghai Drama Art Center.

As of now, the newlyweds have not yet decided on an exact date for their wedding ceremony, but they revealed that it would happen either at the end of this year or at the beginning of next year. In the meantime, fans can look forward to the upcoming drama Blood Oath <血誓>, in which Sunny stars and Yan Kuan has a guest appearance.