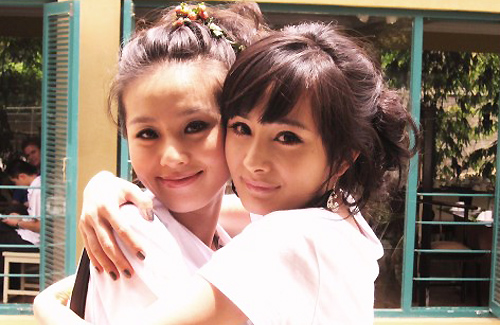 November 13 was a momentous day for Chinese entertainment relationship news, with Cecilia Liu (劉詩詩) publicly admitting to her relationship with Nicky Wu (吳奇隆), and Yang Mi (楊冪) announcing that she and Hawick Lau (劉愷威) had registered their marriage and were planning to hold their wedding in January. Both revelations were posted on the celebrities’ Sina Weibo accounts on the same day. Yang Mi and Cecilia Liu possessed a tight friendship in the past, and while they have less time to spend together due to their demanding careers, they did not forget to congratulate each other in finding happiness in love.

Cecilia and Yang Mi first met in 2009 on the set of Chinese Paladin 3 <仙劍奇俠傳三>, where they became friends in two days after discovering that they had similar interests and personalities. They grew so close that they would often pretend they were kissing each other when posing for photos, and even described their friendship as “love at first sight.” Fans held them up as proof that true friendship could exist in the entertainment industry.

“In many of my previous dramas, the friends I made would part ways after filming wrapped up,” Yang Mi once shared when asked about this rare friendship. “But that’s not the case with Cecilia and I. We are definitely that type of good friend who can still shop, eat, and chat with one another even after filming ends.”

In 2011, the two shot to fame when starring in separate Qing Dynasty-era time-traveling dramas – Yang Mi in Palace <宮> and Cecilia in Bu Bu Jing Xin <步步驚心>. Because the two series shared many similarities, netizens took to comparing the lead actresses, leading to rumors that the two were at odds.

Recently, a netizen also revealed that during the filming of Chinese Paladin 3, Yang Mi angered the drama’s producer, Karen Tsai (蔡藝儂), by separately endorsing an online game. Tsai, who happens to be the CEO of Cecilia’s management company, expressed her discontent in an online post, and blocked Yang Mi from promoting Chinese Paladin 3. This reportedly caused Yang Mi to be on bad terms with Cecilia, who felt like she was caught in the middle.

Both actresses denied any feelings of discord, and Cecilia shared that she and Yang Mi always dismiss these rumors with a laugh. “Everyone wants to see us not getting along,” she said, “but that’s not the truth.”

Due to their rising popularity, Cecilia and Yang Mi grew increasingly busy and had less time for each other. Yang Mi said, “In the entertainment industry, one of my closest friends is Tiffany Tang (唐嫣). A few years ago, I was very close with Cecilia Liu as well, but we are a little more distant now. I’m not saying that we’re not good friends anymore, but we don’t have as much time to spend together as we become busier.”