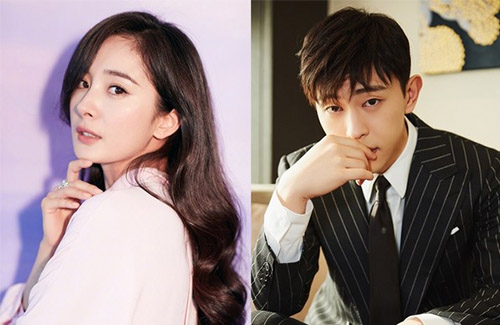 According to official sources, Yang Mi will soon begin work on a new television drama Once a Youth <曾少年>, in which she plays a Beijing-born millennial who has big dreams of starting a career as a blogger. She passed on a relationship when she was still studying in college, and it wasn’t until after experiencing a big earthquake when she realizes that he loved her too. The source did not reveal the male lead, but rumors say Yang Mi and her reps have been courting 26-year-old Deng Lun (邓伦), best known for starring in Ashes of Love <香蜜沉沉烬如霜> and the Chinese variety show Where Are We Going, Dad? <爸爸去哪儿第五季>

Deng Lun made his debut when he was 18 years old, for the 2013 television drama Flowers in Fog <花非花雾非雾>. He shot to fame after starring in the 2016 drama Because of You <因为遇见你>, and made a special appearance in the 2017 hit drama Princess Agents <楚乔传>. He has just completed filming the drama My True Friend <我的真朋友> with Angelababy and Zhu Yilong (朱一龙), and has begun work on the new drama Come On, You’re the Best <加油，你是最棒的> with Golden Horse film queen Ma Sichun (马思纯).