Ady An to Star in Taiwanese Idol Drama with Mike He 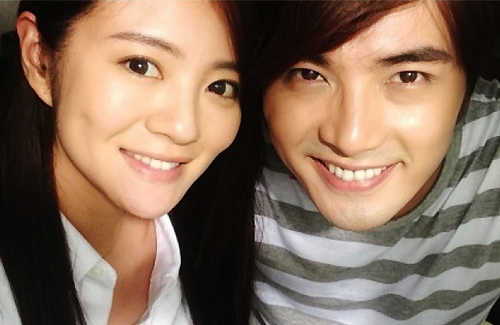 After eight years of focusing on her career in mainland China, Taiwanese actress Ady An (安以軒) returned to Taiwan to film idol drama Upper-Class Common Girl <上流俗女> (unofficial title), in which she will star with popular Taiwanese actor Mike He (賀軍翔).

In this new drama, Ady will take on the role of a pig farmer’s daughter. Her father wants to send her to a high-class etiquette school, where she meets Mike He’s character, a rich, upper-class man. Because Ady has often played meek, easily bullied characters in the past, the production company of Upper-Class Common Girl hoped to subvert her previous image by fashioning a different type of role for her.

Ady began to make a name for herself in the Taiwanese entertainment industry with the 2001 drama Spicy Teacher <麻辣鮮師>, after which she became popular with the two-part series The Outsiders <鬥魚>. In 2005, she turned her focus to the mainland Chinese entertainment industry, appearing in dramas like Chinese Paladin <仙劍奇俠傳>, Flying Fox of Snowy Mountain <雪山飛狐>, and Love Tribulations <鎖清秋>. In 2009, Ady returned to Taiwan to film Autumn’s Concerto <下一站，幸福>, which was an enormous success and set the second-place record for average ratings for an idol drama.

Because of Ady’s popularity in Taiwan and mainland China, rumors have begun to spread that she is making exorbitant demands for her participation in Upper-Class Common Girl. She is reportedly asking to be paid $300,000 TWD for each episode, as well as to be provided with a private bus and a chauffeur. She also hopes that the company will cast her good friend, actor Shone An (安鈞璨).

In response, the drama’s producer Ke Yiqin (柯宜勤), who worked with Ady for The Outsiders, said it was worth it, explaining that it is natural for artists to have some demands after they have reached a certain position. Despite the rumors of high-handedness, Ady is proving to be dedicated to her work, as she recently uploaded a picture on her QQ Weibo, which depicted her perpetually studying the drama’s screenplay, even during meals, makeup sessions, and rest time.