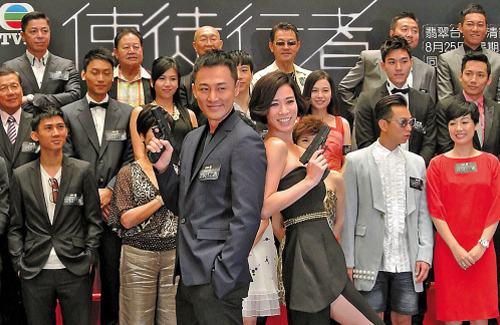 Line Walker <使徒行者> is scheduled to air on Monday, August 25.  The cast promoted the series earlier this week, hoping to attract more viewers to tune in next week.

While Line Walker marks Charmaine Sheh’s (佘詩曼) return to TVB dramas, the series is Raymond Lam’s (林峯) last project with the station. On August 4, Raymond announced that he will not be renewing his management contract, and will focus on his singing and movie careers instead. Despite this, Raymond has been actively promoting the series at TVB functions.

Setting speculations aside, Raymond insisted his departure has nothing to do with losing the TVB Best Actor award. He is meeting with different companies to decide on future collaborations. “I want to concentrate on my own creations. With acting, it’s still best to have good resources and a great company to help make arrangements. It [EEG] is one of my choices – we’ve worked together for years and I’ve gotten to know the people. They’re a very strong company,” Raymond explained.

Since Raymond was one of the judges for Miss Hong Kong 2013, but is no longer affiliated with TVB, it was reported that ATV wanted him to join the judging panel for this year’s Miss Asia Pageant. Surprised at the news, Raymond said that no one has contacted him regarding the pageant.

Charmaine’s Eyes Not on Winning Award

Appearing in a low cut black dress, Charmaine said that she is not focused on winning the Best Actress award this year. “Never thought about it. You don’t have to look at the viewership ratings for a series all the time, and should also consider the feedback. I’d rather people call me by my character name – Dang Jeh.”

Charmaine feels heartbroken for Kai Ko (柯震東) and Jaycee Chan (房祖名) over their drug arrest in China despite not personally being acquainted with them. Charmaine firmly said that does not have friends who have drug habits, and has never been tempted herself, opting to go shopping to reduce stress.