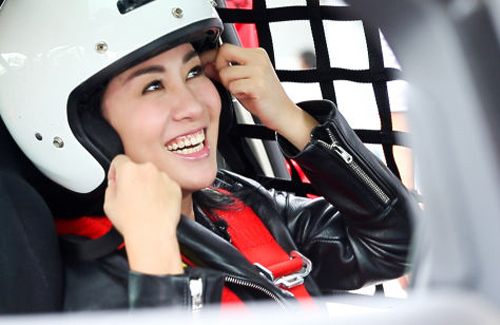 Michelle Ye (葉璇) is the first female entertainer to accept the car racing challenges in the variety program Top Gear <巔峰拍擋>, a remake of the British television series. She made her appearance on Wednesday’s episode of the show, marking her first public appearance since Mr. B’s $6 million HKD LED confession last week.

Michelle displayed her confidence in riding fast vehicles during an interview for the show. “I’ve flown a plane before due to Triumph in the Skies <衝上雲宵> and an aerobatic aircraft. I’ve also been in car races before, and raced with Aaron Kwok (郭富城).”

Compared to the other contestants on the show, Michelle was surprisingly calm and brave. She also showed her excitement and often teased with the camera. Though the male contestants still outperformed Michelle in many other categories, Michelle remains as the highest-scoring female on the show. Experts say that the records Michelle achieved while competing on the show will take a while for other female celebrities to break.

Michelle accidentally crashed into a pile of rubber barriers while making a sharp turn, but she managed to pull herself through with her quick-thinking. Admitting that the stunts performed in Top Gear can be quite dangerous, Michelle purchased a seven-figure insurance policy. Michelle revealed, “This insurance is to remind me that while I am racing, not only should I have to take care of myself, I also cannot disappoint the fans.”