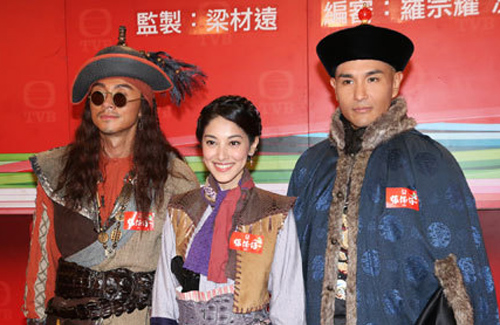 Portraying the title role, Raymond Wong will have action and water scenes ahead requiring significant wirework. Suffering from inflamed tonsils in the last month, Raymond admitted that his health is not up to par, but will try to his best to meet the filming demands. He said, “My immune system is weak. My mouth ulcers prevent me from sleeping well at night and my fever keeps coming back. Tomorrow, I will have a body check and blood tests done.”

TVB’s new Cheung Po Tsai drama was accused of lifting ideas from Ronald Cheng‘s (鄭中基) similarly themed-pirate movie, Mysterious Treasure <神秘寶藏>, which was announced in April and completed filming in the summer. However, Raymond revealed that TVB producer Leung Choi Yuen (梁材遠) already contemplated the drama much earlier, “Before the movie version was announced, I heard Uncle Choi has been conceptualizing this drama for a long time. But it was not the right time to reveal the details.”

Grace Chan and Ruco Chan also defended that Cheung Po Tsai is an independent project and not influenced by Ronald Cheng’s movie. Ruco said, “They’re different works. Viewers have not even seen them yet. The television version will have more story arcs and characters.”

Ruco added that he will need to shave his head for the Qing dynasty drama. Outside of filming, he plans to wear wigs and caps at promotional functions to avoid revealing his bald head.

After filming local scenes in Hong Kong, the cast and crew will travel to Hengdian in November to film on location.