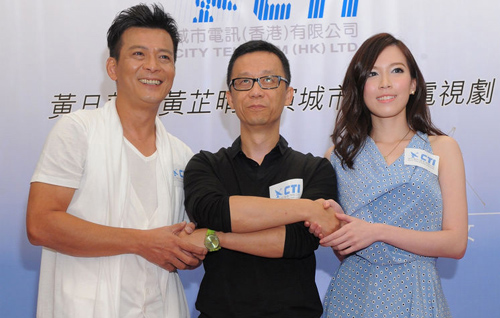 The mastermind behind HKTV, Ricky Wong (王維基), has revealed that he plans emulate American television production formats by producing a pilot episode for every proposed HKTV television drama in the coming future.

The company is also in three ongoing lawsuits against ATV and the Hong Kong Economic Journal, adding more financial pressures to the newborn company.

To lower financial spending, save up more resources, and prevent the possibility of “warehousing” dramas, Ricky ordered HKTV’s directors and scriptwriters to first produce a television pilot – a standalone episode – for each pitched television drama. The pilot will then be sent to a committee for screening, and if reviews are positive, Ricky will go ahead and give the television show a green light.

Many of HKTV’s production crew had voiced their opposition on the new format, arguing that it would be a waste of time and effort if the pilot ultimately gets turned down. An anonymous HKTV scriptwriter expressed, “We will still get our salary by the end of the month, but this new system is an obvious excuse to spend less money! We all work hard on our scripts; if only one episode gets filmed, and it gets rejected in the end, that will be a huge waste on our efforts!”

HKTV spokesperson, Jessie, stated, “We are still spending over $1 million HKD per episode in our dramas, and we will not spend to any less than that.”

Nonetheless, Jessica confirmed that HKTV will incorporate the new television pilot format for their upcoming productions. “We will test this pilot format in our upcoming drama Flow of the Years <歲月流情>, which will begin production at the end of the month. We will work on some opinion surveys too. The same amount of money will be spent on each production; the only difference is that the production time will be extended. It’s fine. We still don’t have our license yet, so it’s a good thing to explore some more and come up with new topics for our dramas.”

HKTV artists expressed their support on the new production format. Ha Yu (夏雨) said, “Although this will be my first time working with [Ricky], I know that he is very sincere about producing dramas that are different from TVB’s. Filming and re-shooting each episode will require a great amount of time and money, but that is all for quality guarantee.” Ha Yu, who will star in the pilot of Flow of the Years, revealed that the drama was planned to begin shooting in early March, but due to script rewrites and reedits, the filming was postponed to late April.

Felix Wong (黃日華) released a statement through his manager, expressing that he also supports the new pilot format. “It’s good to see something new. It will take time to get used to the new system, because the new format will definitely affect artists’ schedules. However, [Felix] and Ricky have made an agreement, so the new format will not be a problem.”

Leila Tong (唐寧) said, “I’ve already filmed two dramas for HKTV, and I know the company has high requirements for their dramas. Doing a test pilot is a good thing.”