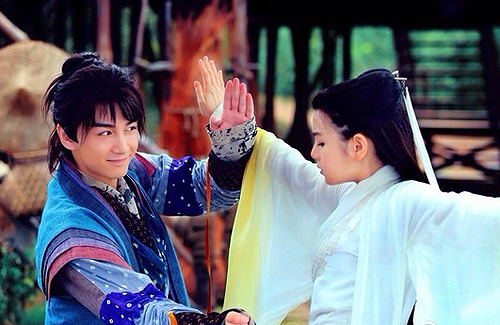 Above: Chen Xiao and Michelle Chen star in “The Condor Heroes”.

The newest adaptation of the wuxia novel, Return of the Condor Heroes <神鵰俠侶>, which stars Chen Xiao (陳曉) as Yang Guo and Michelle Chen (陳妍希) as the Little Dragon Girl, recently accepted media interviews during filming at Hengdian World Studios. Although netizens have found fault with almost every aspect of the drama, from the casting to the costuming, producer/ screenwriter Yu Zheng (于正) remains unfazed by the online disputes and maintains that this version will be a new interpretation of the wuxia classic.

Michelle Chen: “Classics Are Called Classics Because They Cannot Be Duplicated”

Female lead Michelle Chen has undeniably come under the most fire after she was announced as Little Dragon Girl. Many netizens derided her as looking too much like “the girl next door,” an image that helped her gain widespread popularity in the 2011 Taiwanese romantic movie, You Are the Apple of My Eye <那些年，我們一起追的女孩>, but that does not seem to fit Little Dragon Girl, one of the most beautiful characters created by novelist Jin Yong (金庸).

However, Michelle has stayed calm and collected in the face of such fire, explaining that everyone has his or her own image of what constitutes a classic. “My classic Little Dragon Girl is the Carman Lee (李若彤) version,” she shared. “No matter who comes out, there will be someone saying, ‘This is not my version of Little Dragon Girl.’ But classics are called classics because they cannot be duplicated – there is already a classic there.

“I hope to give everyone a different kind of image,” she went on. “I can guarantee that this new version of Little Dragon Girl will bring forth a completely new interpretation when compared to the previous versions!”

Male lead Chen Xiao shared a similar sentiment, saying that he has confidence despite the frequent online criticism: “Since it’s a classic, people will have different opinions, so [disputing] is understandable. But we have confidence that we will be able to create an entirely new work with a different feeling!”

According to Chen Xiao, he and Michelle hit it off well during filming, which helped them become immersed in the scenes more quickly. Nevertheless, Michelle’s lively disposition on set caused some to wonder how she would portray the icy exterior that has become expected of Little Dragon Girl.

“In the book, Little Dragon Girl is not as emotional before meeting Yang Guo, and she really is a cold and austere person,” said Michelle, who added that she was a loyal Jin Yong fan and read his entire works during middle and high school. “But after she meets Yang Guo, she slowly begins to have human emotions. She actually is a very emotional person.

“No one stipulated that Little Dragon Girl must have a quiet and cold image,” Michelle continued. “That’s only in the beginning, when she’s in the Ancient Tomb, before she meets Yang Guo. There are also times when she is cute, witty, and livelier. People think she doesn’t smile very much at first, but in Jin Yong’s novel, there are times when she is described as giving a charming smile. So there are moments when she’s happy. The Little Dragon Girl in this version will smile more.”

As for the rumors that she had lost weight to play the role, Michelle confirmed that she is currently adhering to a strict diet of no oil or salt, but only for health reasons. “Rather than say it’s to lose weight, why don’t you say it’s so I can prepare myself to be healthy and be in the best state possible?” she asked. “My current state is already much better than before.”

Yu Zheng Refuses to Change in Face of Criticism

Like Michelle and Chen Xiao, Yu Zheng maintains that disputes are unavoidable when taking on a high-profile work like Return of the Condor Heroes. “Everyone will have a different opinion on everything,” he said. “There are a thousand different versions of Little Dragon Girl in people’s minds.

“I don’t care much about [disputes],” he went on. “But you can’t change yourself to someone mediocre who has no breakthroughs, just because of disputes. I’m still willing to do only the things I like to do, as well as the things that challenge me.”

Nevertheless, Yu Zheng still made sure not to stray too far from the beaten path when it came to the main romantic storyline of Return of the Condor Heroes. After Swordman <笑傲江湖>, Yu Zheng’s latest wuxia adaptation, some netizens feared that Little Dragon Girl would be relegated to a supporting character, with villain Li Mochou, portrayed by Viann Zhang (張馨予), becoming Yang Guo’s main love interest.

Yu Zheng was quick to assure viewers that he would not make too many changes to the storyline this time. “The core of Return of the Condor Heroes will definitely be Yang Guo and Little Dragon Girl’s love,” he confirmed. “Everyone else serves as a foil to this incomparable love. I want to tell everyone that no matter the size of the setbacks and obstacles you encounter in this complicated and disorderly world, you will reach true love if you persist until the end.”