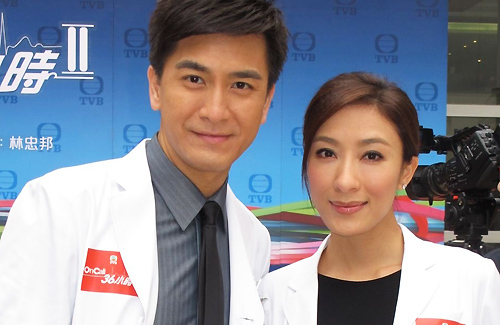 The sequel to last year’s highly successful, The Hippocratic Crush <On call 36小時>, started filming earlier.  The sequel reunites the original cast and continues the love arcs of the doctors, while adding Lawrence Ng (吳啟華), Tracy Chu (朱千雪), and Eliza Sam (岑麗香) to the drama.  Kenneth Ma (馬國明), Him Law (羅仲謙), Tavia Yeung (楊怡), and the cast were at the blessing ceremony for The Hippocratic Crush 2 on February 28.

Kenneth was teased for his appealing bachelor image, in which female costars have been reported to fall under his mesmerizing spell. The role of “Dr. Cheung Yat Kin” has made Kenneth Ma into a highly desirable Diamond Bachelor on the market. Last year’s Miss Hong Kong, Carat Cheung (張名雅), openly admitted that she idolized Kenneth.

Tavia Yeung Only Has Eyes for Him Law

There is no chance that Tavia will fall for Kenneth, since boyfriend, Him Law will be there to monitor her on the set of  The Hippocratic Crush 2. Tavia said, “Then I will have less chance to be part of the promotional news.”

Recent Hong Kong tabloids also blazed headlines that Kenneth has now become a double-timing player, by dating Natalie Tong (崔建邦) and Eliza Sam at the same time. Although Kenneth had attended a group barbecue, in which Eliza was also present, he may face stiff competition against Eliza’s numerous male admirers. Not taking the recent news seriously, Kenneth just laughed over speculations of his love life.

Kenneth and Natalie’s friendship date back to 2010’s A Fistful of Stances <鐵馬尋橋>, when they grew close on set. Their relationship rumors grew when Kenneth celebrated his 39th birthday with Natalie and their friends. Although Kenneth claimed that he regarded Natalie as only a younger sister, their romantic rumors failed to stop.

Lawrence Ng and Tracy Chu portray a romantic couple in The Hippocratic Crush 2. Lawrence praised the newcomer for her performance while Tracy thanked Lawrence for helping her prepare for filming.

Note: This article was updated on February 28, 2013 at 4:55 PM to reflect additional details that emerged in the evening news edition.