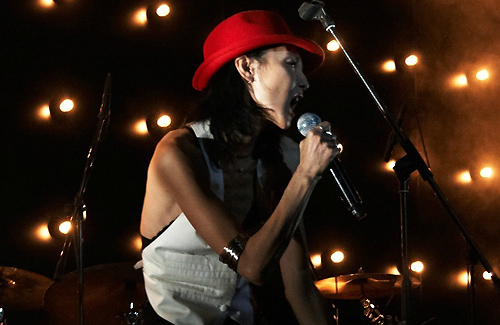 Mainland China’s Modern Sky Records confirmed that Hong Kong actress Maggie Cheung (張曼玉) has recently signed a contract with the indie record label and is preparing to debut as a singer. She is open to exploring different music genres, including electronica and rock music.

The founder of the label, Shen Lihui (沈黎暉), stated, “It is Maggie Cheung’s unique voice and her out-of-the-ordinary taste for music that touched me to sign her.”

Though Maggie is primarily known for her critically-successful films and dignified image, Maggie expressed that she has always had an interest in music. “Ever since I was young in England, to the many years I’ve spent filming movies, I never stopped listening to music. Therefore, music has become a daily habit in my life. In the last few years, I’ve also found an interest of finding new music to listen to. Music has allowed me to experience many different feelings, entertainment, and memories. I am thankful to be able to enjoy so much from something so simple. I really hope that I can share these sentiments through my own music.”

Maggie’s songwriter Song Dongye (宋冬野), who rose to prominence with the indie song “Miss Dong” <董小姐>, revealed that it was Maggie who first approached him about the collaboration. “I didn’t really dare to believe it at first. I felt like I was at the wrong time and space.”

Song Dongye is in charge of arranging and composing the piece, while Maggie will write the lyrics to her new single. Compared to the simple acoustics of “Miss Dong”, Maggie’s new song will be more colorful and preserve her high-class aura. He further revealed that he never realized how talented and professional Maggie is towards music. “I didn’t even know she could sing.” It took Song Dongye and Maggie several months to write out the song, which is still not completed.

“Maggie is talkative, understands music, and we get along really well,” he said. “To be honest, Maggie doesn’t need any more money. She truly loves music.”

However, this is not the first time Maggie dabbled in music. In 2011, Maggie and costar Tony Leung (梁朝偉) performed the theme song for the film In the Mood for Love <花樣年華> at the CCTV New Year Gala. Her deep and rough voice surprised many viewers, but she was nonetheless praised for singing the song live. In 2004, Maggie contributed to the original soundtrack for the film, Clean <清潔>. In 2012, Maggie performed the self-written number “Visionary Heart” with a rock band at an after-party.

Audio clips of Maggie’s music performance leaked online, and many netizens harshly criticized Maggie’s unpleasant voice. One said, “I can’t handle it anymore. Just go back to acting.” In a survey, netizens were asked if they would anticipate for Maggie’s music debut. A majority of them answered no.

Many industry insiders also expressed their concern over Maggie’s entry in the music industry. A man known as Mr. W said, “She has to change her course because she has a terrible voice. If she continues to do her original style, and she ends up signing with a mainstream, large record label, she will definitely flop. From this angle, I think it is right for her to sign with Modern Sky Records.”

Mr. Q said, “We need to have gimmicks in the music industry today.  We have too many [singers], and if we don’t find something special about ourselves, how can we survive? Can you really consider her to be a singer? Maybe she can belt a few notes, but a real singer can do more than that. I feel like Maggie Cheung is just having her fun. She doesn’t need more fame, and she definitely doesn’t need more money. It’s just for fun.”

When asked if Modern Sky Records signed Maggie for an astronomical price, the record label said, “At an appropriate market price.”