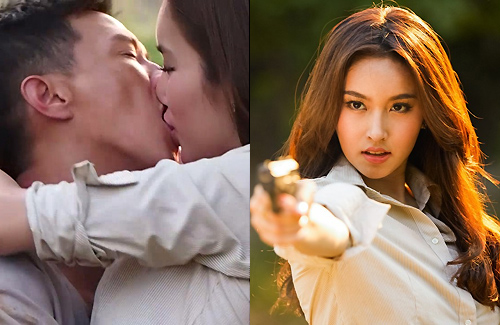 Thai transgender actress, Poy, has been making splashy headlines with her upcoming Chinese film debut in The White Storm <掃毒>. Following a controversial magazine shoot in which Nick Cheung (張家輝) draped his arm around a topless Poy, stills from their kissing scene in The White Storm were released today.  Portraying Nick’s wife in the movie, Poy’s bewitching beauty and kissing skills left Nick confused about his own sexuality. Nick admitted that Poy is one of the most beautiful actresses he has worked with. Aside from Nick, co-star Louis Koo (古天樂) was also taken by Poy’s beauty and reportedly involved in Poy’s breakup with her long-time boyfriend.

Undergoing a sex reassignment surgery at 17 years old, Poy went on to win Miss International Queen, the world’s most prestigious transgender beauty pageant. In the last ten years, Poy established herself as a popular film actress in Thailand and gained a large following across Asia.

When Poy auditioned for The White Storm, director Benny Chan (陳木勝) was impressed by her performance and cast her as Mina, a drug dealer. Nick was not alerted of their steamy scenes together, and was initially told that camera angles will do the rest.

Right before the kissing scene was filmed, Benny told Nick, “[The kiss] will feel very fake if we use camera angles. Let’s film it for real.” Although Benny praised Nick for his professionalism, what did Nick’s wife Esther Kwan (關詠荷) have to say about his hot make out scene?