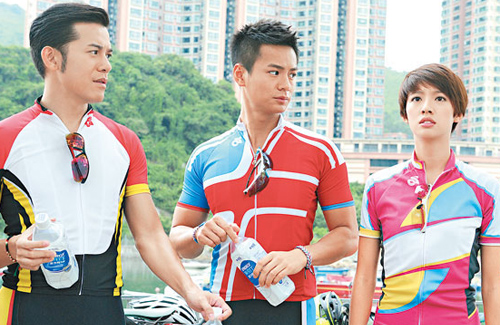 TVB idol drama Young Charioteers <衝線> averaged 23 ratings points in its first week of broadcast. Featuring Him Law (羅仲謙) and Sammy Sum (沈震軒), the cycling drama generated buzz due to its refreshing cast. However, newcomer Sisley Choi (蔡思貝) is taking the heat for her stiff acting. Netizens likened her onscreen performance to a zombie.

After competing in Miss Hong Kong 2013, Sisley’s beauty quickly led to her promotion as lead actress in Young Charioteers. Due to her easygoing personality and friendliness with male co-stars, Sisley was dubbed as a “flirting machine“.  Aside from the negative gossip, Sisley’s acting is now under fire.

Many commented on Sisley’s stiff acting, the lifeless manner in which she says her lines, and her nasal voice which makes her sound like a little girl. Some have also mocked the character’s fashion sense in Young Charioteers, remarking that if anyone were to similarly wear mini-shorts and mini-skirts to the office, she would be ripped apart by her female superiors. Nevertheless, fans loyal to Sisley defended her and spoke up for her “fresh” and “sporty” image.

In response to the criticism of Sisley’s acting and her character’s clothing choice, Young Charioteers producer Kwan Wing Chung (關永忠) said, “I think her acting can be considered above average! Of course, there is room for improvement. I don’t think it’s strange for the character to flaunt her legs in what she wears. The character is, after all, only 22! Moreover, although Sisley’s character has an office job, she is still a very junior employee so she can wear smart-casual to work. If she has to attend more formal functions, then she’ll put on business attire.”