Angelababy Does Bollywood Dance in “Love On the Clouds” 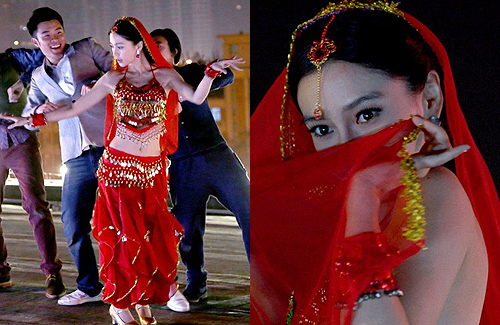 Gu Changwei’s (顧長衛) upcoming romantic comedy Love On the Clouds <微愛之漸入佳境> will open on December 24 in Mainland China, providing the moviegoers with a romantic Christmas Eve. This week, Huayi Brothers released a two-minute clip of lead actress Angelababy performing a Bollywood dance with male lead, Chen He (陳赫). In the video, Angelababy wore a bright red traditional Indian dress and teased Chen He with her sensual dance.

The Bollywood sequence was filmed on the rooftop of a commercial building in the late evening. Though the weather was extremely cold, the cast displayed their professionalism and had fun with the dance choreography. Angelababy also only wore a thin tank top and loose trousers, exposing her bare back and arms to the cold.

Chen He praised Angelababy for being a “true goddess”, explaining that not only is Angelababy a good partner, she is also very professional and an extremely fast learner. “It’s impossible for any man to not like her,” he said.

Love On the Clouds is about a young man who aspires to be a film director, but creative demands and artistic disputes with his film’s investor puts his friendship on the line.