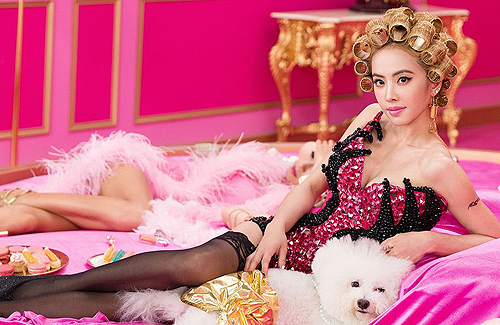 On November 3, Jolin held a premiere event for the music video at the National Museum of History in Taipei, where a part of the music video was also filmed. Jolin transformed into a news broadcaster and introduced her music video in Taiwanese, “Welcome to the 6 o’clock ‘Play’ news!”

In this comeback, Jolin opted for a strange, quirky image to greet her fans. The music video, which was filmed in the style of a console game, took 9 million NTD to make. There were five different elaborate film sets and Jolin had over a dozen bizarre costumes and image changes.

The witty lyrics of “Play” are about having a carefree attitude. In one particular scene, Jolin flashed her nude body at reporters. The sensitive areas were eventually censored in post-production, but Jolin joked that the editors should not have pixelated the nudity.