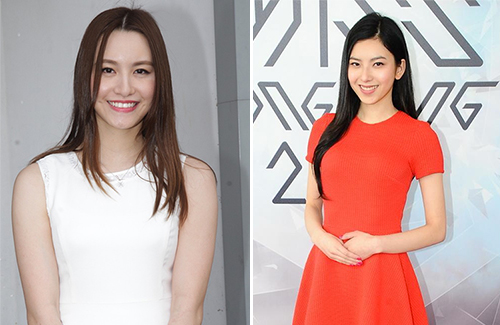 On June 8, 130 Miss Hong Kong hopefuls checked in for their first round of interviews at TVB City studios in Tseung Kwan O. The 2016 Miss Hong Kong Pageant finals will be held in late August, in conjunction with the upcoming Mr. Hong Kong contest. The succeeding Miss Hong Kong will be crowned by last year’s winner, Louisa Mak (麥明詩).

Dubbed by the media as “the Louisa Mak effect,” many of the 2016 applicants have rich academic backgrounds, including graduates from Cambridge, Manchester, LSE, and more. Some applicants have previous experience in multimedia, and a few others are working professionals.

To reflect their sophisticated characters and natural beauty, most of the contestants wore minimal makeup at the interview. When greeting the press, many of the contestants chose to wear elegant sleeved dresses rather than outfits that would highlight their figures. However, they did change into bikinis when they were asked to face the judging panel. Pictured above: Maggie, Sophie, and Angellica.

Quite a few candidates have grabbed the media’s attention during the first round of interviews. The 22-year-old Maggie, who appeared in a cute red dress, is a graduate of the Ivey Business School at the University of Western Ontario, Canada. With her small face and sharp chin, Maggie resembles 2013 Miss Hong Kong winner Grace Chan (陳凱琳). Though skinny, Maggie has a fantastic bust, thus dubbed by the media as the “upgraded Grace Chan”.

23-year-old Sophie Yip, who resembles Bernice Liu (廖碧兒), is a fashion design student from London’s Kingston University. She wore a body-hugging black dress that highlighted her fashion sense. Angellica, a physics graduate from Cambridge University, captivated the media with her academic background, dubbing her “The Cambridge Angel.” 23-year-old Jacqueline To is an alumna of The London School of Economics and Political Science (LSE). In terms of local contestants, 22-year-old University of Hong Kong graduate Crystal Fung, who majored in Food, Dietetics & Nutrition, is receiving attention for her online popularity. Her Instagram has over 16,000 followers. Similarly, 24-year-old “CM Queen” Mandy Yuen is getting some Internet attention with her experience as a commercial model. Having debuted in 2012, Mandy has filmed commercials with actors Louis Koo (古天樂) and Louis Cheung (張繼聰). One of the older contestants, 26-year-old Joyce Ngai, is a lawyer, and she made her appearance in an off-white sleeveless blouse and woolen slacks.