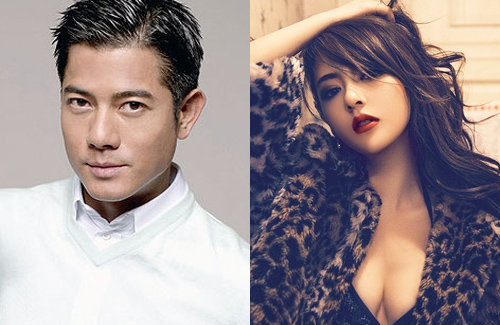 Lately, Aaron Kwok (郭富城) spoke about his desires to get married and settle down. It turns out that the 50-year-old has been dating Shanghainese model, Moka (方媛).

He recently gave a surprise reveal on his relationship status by posting a photograph of his hand clasped over his girlfriend’s, with his car dashboard in the background. Aaron wrote a sweet caption, “I now have to drive a bit more slowly” and tagged the Weibo account of the mystery girl, who turns out to be 27-year-old pseudo-model, Moka. A pseudo-model from Shanghai, Moka has a sweet face with pretty, defined features that hint at a pan-Asian heritage. From certain angles, Moka even resembles Angelababy. Moka has modeled lingerie and was a “soccer babe” in former magazine spreads.

Moka published a photo album in 2012, and belongs to the same management company as Dada Chan (陳靜), a more well-known pseudo-model based in Hong Kong.

Before Aaron’s public acknowledgment of the relationship, a magazine had published photographs of the two of them together, and speculated that the couple has been dating for a year and a half. These photographs were taken when Moka visited Hong Kong a week ago.

Aaron was spotted picking Moka up at the airport, and settling her at his apartment. The following day, Aaron had to attend the premiere of Port of Call <踏血尋梅>, but only stayed for ten minutes at the after-party before rushing back to spend time with Moka, even dropping by McDonald’s along the way to pick up some supper.

Reporters from the magazine had approached Aaron and asked if he was dating Moka. He initially ignored the reporters and walked away but turned back to “rescue” Moka when he realized that she was also being harassed by the reporters.  Aaron’s decision to make his relationship public was perhaps motivated by his knowledge that reporters had already been made aware of its existence.

Aaron’s acknowledgment of Moka as his girlfriend also brings back memories of a minor scandal last year when a female student nicknamed “Miss R”, anonymously exposed Aaron as having flirted with a “Miss M” while still romantically involved with “Miss R” (and even exchanging sexy pictures). At the time, there was widespread speculation over the identity of this “Miss M”, and as Moka was one of the eight models with names starting with “M” that Aaron followed on Instagram, she was a prime suspect. Perhaps she really was “Miss M” after all.

Aaron: “Age is Not a Problem”

Appearing at an event yesterday, Aaron admitted that he has been dating Moka for a period of time, although stated that it has been shorter than a year. The couple met through a mutual friend at a dinner gathering.

With a 23-year gap in their ages, Aaron and Moka’s relationship has been dubbed as a “father-daughter romance”. Aaron believes that compatibility is drive by mutual interests and thinking, instead of age. He dismissed the negative gossip over Moka’s materialistic past and colorful dating history, “Everyone has a past, including myself”. As to what he finds most attractive about Moka, he replied, “I’ll tell everyone later.”

Asked why he decided to reveal the relationship, Aaron said, “Everyone has watched me mature and know that I have always been low-profile in my relationships. At this moment, I hope to use a new method to get to know my partner better. The most important thing is to receive everyone’s acknowledgement and blessings.”

As to whether he regards Moka as his potential marriage partner, Aaron said, “No one knows what the future holds. As to whether we get married, that’s another stage. Right now, no one knows. I will let [fate] decide.”