Aaron Kwok Gets Stuck in the Middle of a Protest 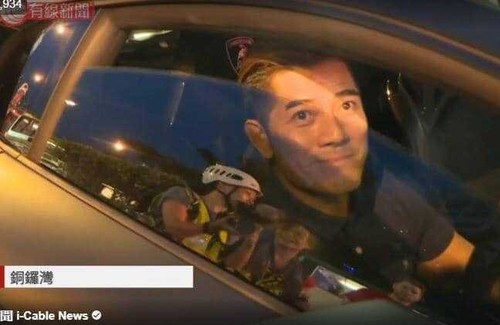 It’s been over five months since the protests of Hong Kong, and there’s nothing that’s going to slow them down. On September 8th, the Hong Kong Human Rights and Democracy Meeting organized a walk, making top headlines. Though the protests ended at around 4:30 p.m., a portion of protestors still remained in the streets of Causeway Bay, affecting traffic and pedestrian flow.

Aaron Kwok (郭富城) was one of the pedestrians.

Driving his blue Lambo, Aaron attempted to drive through the remaining crowd but got stuck. Many protestors and passersby recognized the singer-actor and tried to get photos. Some protestors even shouted, “Thank you for the support, Aaron Kwok!” That attracted even more attention.

Facing the protestors and reporters, Aaron had no choice but to make a response. He lowered his car window and said, “I’m on my way to buy diapers.” Reporters tried to get Aaron’s opinion on the protests, and also asked whether or not he was afraid that his car would get scratched. Aaron said, “I really need to go buy diapers for my daughter.” He then refused to answer more questions and tried to maneuver through the crowd.”