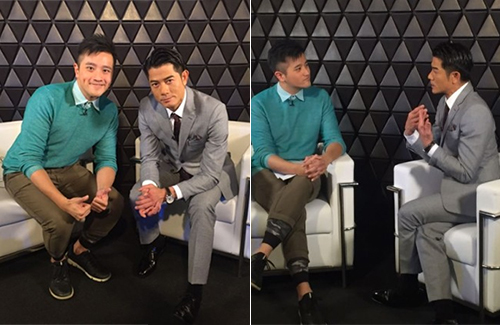 At 51 years old, Cantopop icon Aaron Kwok (郭富城) has finally decided that it is time for him to settle down.

The HKFA-winning actor and singer recently did an interview with TVB’s StarTalk, where he told host Edmond Hui (許文軒) about his big plans for 2017. After winning his first-ever Best Actor trophies at the Hong Kong Film Awards and Taiwan’s Golden Horse Awards last year, Aaron said his life’s mission is near complete.

“I’ve gotten my career’s recognition after winning the Golden Horse and the HKFA. I am thankful! And I’ve slowly come to realize that time will not wait for you. I am 51 years old. I think it’s about time I plan and start a family with kids. This is my wish and goal.”

“I Have Failed My Mother” Aaron, who is dating 28-year-old model Moka Fang (方媛), added, “My mother is getting older. She’s already over 80 years old. She didn’t rush me to get married, but of course I know she wants me too. In terms of filial piety, I have failed. I’ve placed too much of my time in my career. Now, I’m at a steady place, and I also believe that in the future, there will be good news for everyone. I hope and look forward to everyone’s blessings.”

Aside marriage, what other life goals do Aaron have in mind? The actor said, “Directing is a huge challenge, and I definitely want to try it out. I will also continue acting. I’ve filmed movies for so many years, and I want to share my thoughts with everyone through filmmaking. As a director, you have to be clear on how you want the movie to be like, as well as know each and every character. Being a director is much harder than being an actor.”

9 comments to Aaron Kwok: “It’s Time to Start a Family”