Taiwanese singer/ actor Aaron Yan‘s (炎亞綸) sexual orientation was revealed after he was accused of dating three men at the same time. Yesterday, the media published photos of Aaron kissing three different men, and alleged the 32-year-old star was a cheater in love.

Since he was a teenager, Aaron knew that he was gay. Being an artiste meant he had to use more discrete methods to date. The former Fahrenheit star met his recent boyfriends (dubbed by the media as A, B, and C) through social software. As all three boyfriends look shockingly similar, Aaron seems to know exactly what he wants and is attracted by the same physical attributes.

An inside source leaked to the press that Aaron is an attentive lover who always has comforting words to say. Similar to romantic gestures seen in dramas, Aaron would sing songs to his lover in the bedroom. Seeing that an idol star is so sincere in declaring his love, Aaron’s gestures were difficult to resist.

Boyfriend A Got Jealous

Aaron started dating Boyfriend A in 2016 and treated him very well, paying for his rent and even introducing him to his friends in the entertainment circle. What moved A the most were Aaron’s promise of a future together.

In the screen captures of text messages Aaron had sent to Boyfriend A, he wrote: “I hope that we can stabilize [our relationship] over the years, mutually supporting each other and growing together with each step. When we encounter problems, we must talk about them”; “I believe in long-lasting and sincere love although I was once betrayed and hurt by love”; and “I want you to be my significant half. My boyfriend, my good friend, my lover, I hope we can be a family in the future. I don’t know if you’re willing to do so?” Boyfriend A immediately answered, “I’m willing.”

According to A, he felt Aaron was distancing himself since August. A discovered B and C’s existences through their online selfies and was shocked to realize that the photos were taken inside Aaron’s bedroom. When A confronted Aaron, he denied cheating and insisted that B and C were only friends, but nevertheless asked to break up with A. Upset by Aaron’s change in heart, A went to the press and provided photos of Aaron kissing B and C. 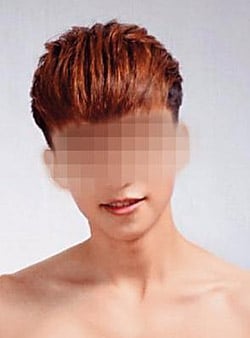 As Aaron’s cheating claims made headlines, Boyfriend B spoke with the press to clear Aaron’s name. He revealed that Aaron dated Boyfriend A from 2016 to 2017. Although Aaron asked to break up, A was unwilling to let go and got very upset. A even sent intimate photos of Aaron and himself to B, but Aaron assured B that he was not the third wheel and showed him text conversations about their breakup.

After splitting with B at the end of 2017, Aaron went on to date Boyfriend C. But B still misses Aaron, “I still love him a lot….”

“I gave my sincerest feelings to each person. I didn’t end the relationships in the proper way which led to things turning out like this, which I didn’t anticipate beforehand. I apologize to each person that I had hurt,” Aaron responded in a statement, maintaining that he had dated the men at different times.

However, Aaron’s trust in people was taken advantage of and led to him being betrayed, “I’m a person who doesn’t carry mistrust and self-guard when I meet others. Since I don’t think too much, I often reveal my most naked self [to others].”

Shedding his boy-next-door image, Aaron toughens up in the action-packed “Please Give Me a Pair of Wings”.