Aimee Chan Gets Ready for Comeback 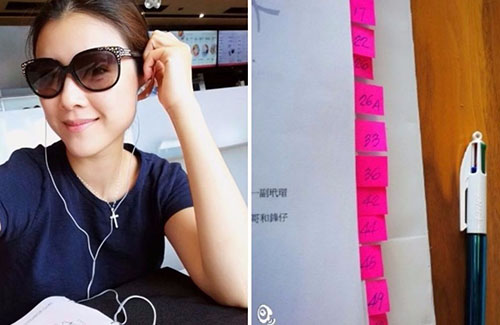 Aimee Chan (陳茵媺) will be making her comeback soon!

After her marriage to Moses Chan (陳豪) in 2013, the former TVB actress took her hiatus from the industry to start her family. Her last television drama before ending her TVB contract in 2015 was Outbound Love <單戀雙城>, which was shot in 2013.

The 36-year-old Miss Hong Kong winner, who is currently in Canada with her three kids, updated her Weibo with a new selfie and a sneak peek of the script she was reading. she wrote, “Now that I’ve settled down, it’s time to study my script! Thank God for grandparents! They are helping me watch the kids for a few hours so I can concentrate!”

Aimee did not reveal the name of her new script, but in an interview with Moses Chan several days ago, he told the press that his wife had just accepted an offer for a role in a movie.

The actress’ last movie 2016’s LET’S EAT! <開飯啦！>, a Singaporean-Malaysian film directed by and starring Chapman To (杜汶澤). It was shot in 2015, after Aimee had her second son Nathan.

It is not known if Aimee will be returning to TVB soon; her husband, however, is currently filming TVB’s My Ages Apart <誇世代>. Moses will also be starring in TVB’s Line Walker: The Prelude <使徒行者2>, which premieres later this year.

26 comments to Aimee Chan Gets Ready for Comeback