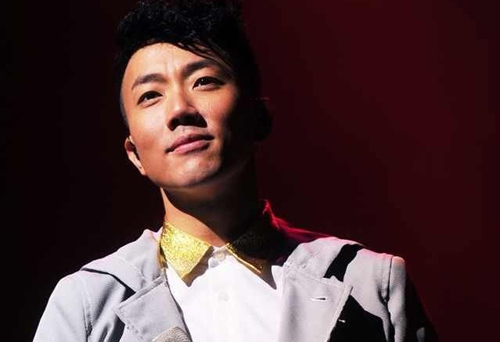 On Sunday, Wilfred and Annie Liu (劉心悠) attended an Olympics marathon event together. With Wilfred hiding inside the organizer’s tent and barring the press from entry, Annie was forced to meet the press outside in the rain.

At the blessing ceremony of Second Life yesterday, Wilfred made a public apology to both Annie and the media for the inconveniences he had caused. Although Wilfred spoke with the press, he dodged questions regarding his relationship with Joey. When asked if he and Joey were in a stable relationship, Wilfred joked, “I have a great relationship with Joey Tang (鄧建明), guitarist for rock band Tai Chi!”  Asked what he thought about Joey’s handwritten confession letter and whether they broke up, Wilfred said, “Everything that needs to be explained is written in that letter! Besides, today is a big day for me because it is my first time filming a drama.”

When it was mentioned that he was dating Joey, who was a superstar, Wilfred said, “Work is more important at the moment!” Regarding Joey stating that she still has other love options in her letter, Wilfred briefly replied, “As long as she is happy!”

Albert Yeung Worries for Joey Yung: “I Hope There Are No Ulterior Motives”

Since the exposure of Joey and Wilfred’s romance—dubbed by the Hong Kong media as “Lung Yee Romance” (龍兒戀), the public has criticized Wilfred harshly. EEG’s Chairman, Albert Yeung, was swift in criticizing Wilfred and questioning his intentions.

Asked about his opinion on the financial and status disparity between Joey, a celebrated diva, and Wilfred, an ordinary local singer, Mr. Yeung replied, “Relationships have never been soley about class or wealth. We should not use such benchmarks to compare. Joey’s happiness is the most important! We all love her, and her happiness is what matters. What is most important is that there are no ulterior motives!”

Mr. Yeung remarked that he does not know who Wilfred is; Joey never brought Wilfred to meet him. Asked if he will give Joey relationship advice, Mr. Yeung said, “Am I even qualified to? Although I am the boss, I cannot make decisions for everything! I would have done that ten years ago, but I will not do that now!”

Asked if he will send blessings to the couple, Mr. Yeung said, “I hope she is happy and that she has found someone she loves. I hope he truly cares for her and is not with her for ulterior motives!”

Mr. Yeung repeatedly emphasized that it was foolish and childish of Wilfred to make such a high profile announcement of the relationship. He said, “He’s actually really stupid! They just started dating. It’s not even a stable relationship yet and he made it public! He is so stupid!”

Regarding speculation that Wilfred may be attempting to gain greater publicity, Mr. Yeung said, “I do not dare to comment on his intentions. I just think that he is so stupid! If he really cherishes this relationship, he should not have revealed at such an early time. It’s very reckless of him!”

Despite Mr. Yeung calling him stupid several times, Wilfred did not reply to the critical remarks. Joey also did not respond to any questions regarding Wilfred when she was spotted at EEG’s main building yesterday afternoon.

9 comments to Albert Yeung: “Wilfred Lau Is So Stupid!”