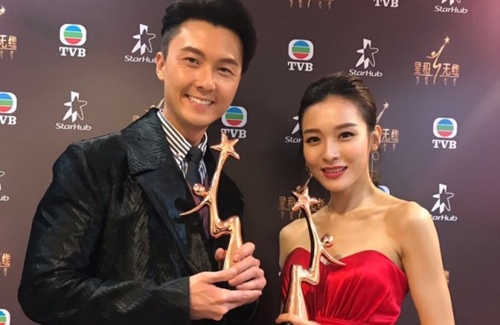 Considered a dark-horse in this year’s race, the Best Actress award came to Ali’s surprise.  Ali’s first words on stage before giving her thank-you speech was “Why?” She was unable to believe that she had won.

Nervous but thrilled to receive the honor, the 34-year-old actress expressed, “I lost from the get-go – I entered the industry at a later age and started later so I don’t have a lot of experience. But this award is your way of telling me that I should continue to work harder in becoming everyone’s favorite actress.” Having mainly played the homewrecker and mistress type roles in the past, Ali revealed that she never really liked any of her roles until encountering Legal Mavericks‘ Never.

Although a lot of viewers praised Ali’s role, Never, some were not big fans of the actress. Some viewers thought Ali was not ready for the award as she has only been with TVB for five years.

Unlike Ali, whose win surprised a lot of fans, Vincent’s character as the stubborn and reserved Hope Man in Legal Mavericks won praise for his outstanding performance.

Presenting the award that night, Nancy Wu (胡定欣) recalled working with Vincent in Gun Metal Grey <刑警> when he was still a newcomer. Having witnessed his hard work over the years, Nancy was extremely touched when she handed him the award on stage.

Tearfully accepting his award, Vincent revealed that his grandfather disapproved his choice in becoming an actor so much that he ripped up his application form the first time. Vincent said his grandfather initially did not want to see him to become an extra on a show. After Vincent’s award, he is finally able to prove to his grandfather that he made the right choice.

Legal Mavericks also produced another winner that night – Owen Cheung (張振朗), who took won Best Supporting Actor. Unable to contain his tears when his name was announced, Owen cried the entire way as he was walking up to the stage, drawing in laughter from the crowd. Having played many minorroles for the past five years, Owen’s only form of recognition was that he resembled Chilam Cheung (張智霖) and Bosco Wong (黃宗澤). Holding his award up high that night, Owen proudly cried, “I am not a knockoff version of Chilam, I am not a knockoff version of Bosco, I am Owen Cheung!”

When Jacqueline Wong (黃心穎) was announced Best Supporting Actress, the usually cheerful  28-year-old teared up. Afterwards, when asked why she did not thank her rumored boyfriend, Kenneth Ma (馬國明) when she was giving her speech, Jacqueline smiled, “He was included in that list [of people I thanked].”

To celebrate Starhub and TVB’s 25th collaboration, the awards show introduced a new category –TVB’s Most Favorite Male and Female Characters in the Past 25 years. Wayne Lai (黎耀祥), who won for his role as Chai Gau in Rosy Business <巾幗梟雄>, talked about his feelings and hardships on his road to becoming an actor and thanked everyone who supported him over the years.

Nancy Sit (薛家燕), who won for her role as the beloved Ho Yee in popular sitcom A Kindred Spirit <真情>, expressed her gratitude for having been given this opportunity. At the lowest point in her life where she was struggling to care for her three children, Nancy was given this role that ultimately shot her to stardom. This year, The Unholy Alliance <同盟> won Best Drama, with each of the four main leads winning the My Favorite Male and Female Character awards. Winning his very first award in the 22 years he has been in the industry, Joel Chan (陳山聰) sobbed uncontrollably during his acceptance speech, bringing his co-star Elaine Yiu (姚子羚) to tears as well.

Other winners for the My Favorite Male and Female Character awards were Edwin Siu (蕭正楠), Raymond Cho (曹永廉), and Natalie Tong (唐詩詠).

Singapore’s Starhub TVB awards are usually seen an indicator towards which artistes will be winners at the upcoming TVB Anniversary Awards in Hong Kong.