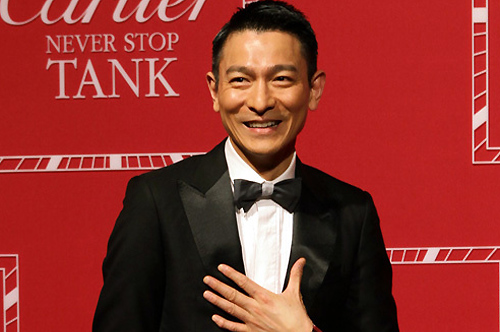 Yesterday, Andy Lau (劉德華) attended a fashion event in Shanghai. It is Andy’s first public appearance since the birth of his daughter two months ago.

While Andy insisted to keep his private life low-profile, he was noticeably in high spirits, and smiled widely when discussing about his family, “I rarely talk about my family in such a public manner, but I can say right now that I’m very happy! Thank you!” A reporter pointed out that Andy looked thinner. Andy immediately said, “What? No! I’ve gotten fatter!”

The known workaholic also lessened his workload to spend more time with his wife, Carol Chu, and daughter. “I usually do a few films every year, but I have nothing really major planned for this year,” said Andy. “However, I was in the middle of filming a movie for Johnnie To (杜琪峰), but I don’t know if we’ll be continuing it this year. I will also go to London to support the Paralympic Games.”

A few weeks ago, Andy was caught eating dinner with director Derek Yee (爾冬陞) and his family. Derek exposed that Andy is a master at changing diapers! Andy laughed, “Derek said too much! Let’s not publicly discuss this. If everyone is interested, you can chat with me privately. I don’t want to talk too much about my family in front of the camera.”

When asked if Andy had plans to hold a Hundred Days Banquet for his daughter or have a boy for his second child, Andy merely smiled and said he would not reply to those questions.