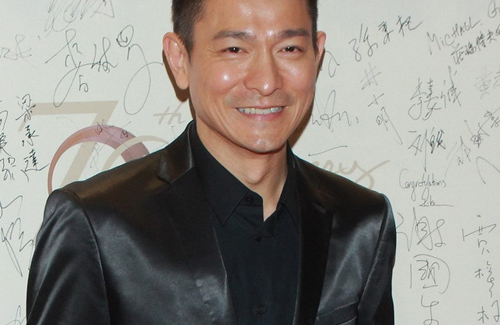 Now that 8-month old Hanna is a few months away from turning the big 1, rumors say that parents Andy Lau (劉德華) and Carol Chu (朱麗倩) intend to chase for another baby, specifically a boy. Although Andy is known for being a “bull” workaholic, the international star has recently slowed down the output of his work and placed all efforts in caring for his family. It appears that Andy is definitely looking for a young brother for Hanna!

The Hong Kong press recently obtained an exclusive report on the low-profile Andy, who spoke up about his current life with Carol and Hanna at an earlier social party. Although it was a private party, the extremely discreet 52-year-old star still did not reveal too much information about his family life. However, he freely chatted with other party guests about parenting. He also revealed that he is fully in charge of caring for Hanna once he returns home from work, fulfilling his duties as a responsible father.

Aside from changing her diapers, Andy happily said that he is also responsible for feeding her when she wakes up in the middle of the night. Regarding this tiring experience, Andy gave a painful look and sighed. However, Andy gushed that Hanna is obedient and loves to laugh.

Besides being one of the most private residential flats in town, the Hampton Court also provides a private gym and high-end recreational service – The Little Gym – for children. Andy planned to attend a private party for parents at The Little Gym earlier last October, in which he was to bring along Carol and Hanna. However, believing that there would be press at the party, Andy decided to attend the party himself.

Andy was allegedly very pleased with the environment and services offered at The Little Gym, and from November onward, Andy often brought Carol and Hanna over to The Little Gym to attend private events. According to reports, Andy and Carol made a lot of new friends with other new parents.

An insider revealed that Andy was very social that night at the party, and did not hold himself back when other guests asked him about his daughter. The insider said, “He was willing to show everyone a photo [of his daughter]. Everyone was pretty shocked, but he was also very careful and would look around his surroundings a lot, checking if anyone was going to take a picture of it.”

A witness who saw the photo of Hanna said that she strongly resembles her mother, Carol. A member of the party then asked Andy if he is looking for a snake baby, in which Andy responded with a huge smile, “I’ll try my best!”