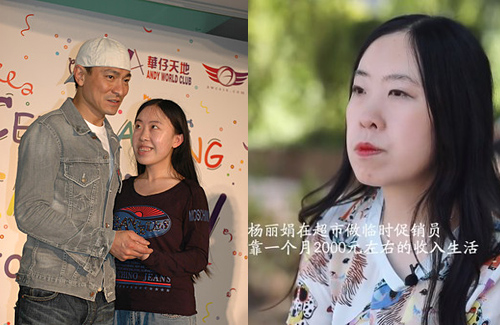 In 2007, Andy Lau’s (劉德華) obsessive fan by the name of Yang Lijuan (楊麗娟) drew public uproar when her extreme idol-chase antics resulted in the death of her father. To fulfill Lijuan’s dreams of meeting Andy, her father took on huge financial burden and eventually committed suicide.  Now twelve years have passed since her father’s passing, Lijuan has moved on from her past and is no longer the fan girl who will do anything to meet her idol.

Lijuan was 16 years old when she developed an unhealthy infatuation with Andy. Lijuan kept a collection of his newspaper clippings and all his music records, and vowed that she would not marry until she met Andy. Trying to make Lijuan happy, her father sold his house, amassed huge debts and even tried to sell his kidney so Lijuan could meet Andy.

Lijuan eventually was able to meet Andy at a fan gathering, but she was unable to privately talk to him. Feeling that he failed his daughter, Lijuan’s father ultimately ended his life by jumping into the Salisbury Sea and in his suicide letter, pleaded Andy to meet his daughter again.

In a recent interview, Lijuan shared that after her father’s death, she scattered his ashes into the Yellow River and would visit the riverside during the annual Qing Ming Festival. Speaking to her father, Lijuan said, “Daughter knows. You sacrificed a lot for me. Mom and I are fine now. I know I have to work hard. I will take care of Mom. You are the greatest father. Please forgive your daughter.”

After all these years, Lijuan confessed that she has truly put the past behind and is taking care of herself. Though she currently works in a supermarket earning 2,000 yuan a month, she hopes that her living condition will continue to improve and that she can provide a better life for her mother.

When asked if she would have done the same thing if she could relive her life, Lijuan answered, “No, I wouldn’t do things like that.” Learning from her past, Lijuan now enjoys the simple things and finds comfort in looking at the blue sky, green trees, and the sounds of birds. Commenting on her growth, “I thank God for not giving up on me. I am grateful every day.”

After the release of the interview, many netizens left supportive comments and were moved by Lijuan’s change. Praising Lijuan’s relationship with her father as genuine, many netizens acknowledge that life was not easy for Lijuan and they hope she can live a peaceful life from now on.

Devoted Andy Lau Fan Saves Virginity for 20 Years: “I Want to Have His Baby!”