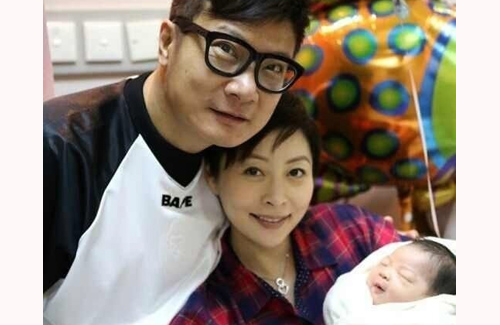 On March 10, Angela Tong (湯盈盈) and Chin Ka Lok (錢嘉樂) welcomed the birth of their daughter Alyssa Chin. Angela and Ka Lok reveal their feelings towards parenthood and how their lives have greater meaning now.

Initially, Chin Ka Lok was hesitant in witnessing Angela give birth in the hospital delivery room. Ka Lok was finally persuaded by the doctor and nurses to go in, and it was an experience he would never regret in partaking. Ka Lok said, “If I had not gone in, I would not realize what Angela had to go through to bring our daughter into the world. It was indeed a very touching sight.”

Despite having a nanny, domestic helper, and parents to help with the baby, Ka Lok took half a year leave from work to stay by his wife and daughter’s side. Working as action choreographer not only removes Ka Lok from his family day and night, he will also be stressed and need to watch over the actors on the set. Wanting to put his efforts into taking care of his family, Ka Lok decided to only host the Super Trio <獎門人> variety show and not take up long-term work projects.

Ka Lok is a hands-on father and has burped and changed diapers for Alyssa. However, it has proved to be more difficult that he could imagine. Ka Lok laughed, “As an action star, I am used to exert a lot of strength but when it comes to burping Alyssa, I am afraid using too much strength will hurt her. But using too little will not have the desired effect. In the end, the nanny had to take over.”

Ka Lok confessed that he and Angela are often chided by the nanny. Ka Lok gushed, “Angela is always carrying Alyssa and occasionally I will snatch Alyssa from her. I have always liked children and enjoyed playing with them. Now that I have my own daughter, the feeling is different but very strong. Even if I go out for a while, I will go into her room to take a look at her the moment I come back.”

The couple also missed their daughter so much that they wheeled the baby’s cot into their bedroom against the advice of their nanny and parents.

Baby Brings a Family Together

According to Angela, Alyssa has not given much trouble to mommy. Angela was grateful for an easy pregnancy, and her labor was also short and tolerable. Though Alyssa was born a week before the expected date of delivery, she was a healthy 7-pound-3-ounce baby.

Angela successfully gave birth to Alyssa naturally and she chooses to breastfeed, even though this will not allow Angela to sleep well since Alyssa needs to drink every hour.

The birth of Alyssa has brought Angela and Ka Lok closer as a couple, who hopes to have another child. Ka Lok said, “The baby has brought us much joy and motivation. We now learn to support each other as a couple and that’s very good. God has given me many good things this year and I will definitely cherish all that I have.”