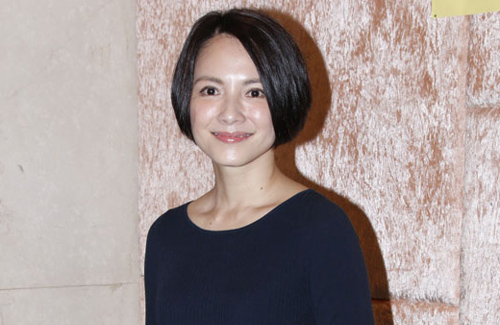 Angelica Lee (李心潔) answered questions about her husband’s infidelity at a completion banquet for the HKTV drama The Election <選戰> yesterday, expressing that she has forgiven her husband and is now looking toward the future.

In May, Angelica’s husband director Oxide Pang (彭順) was caught in a cheating scandal with a model Liddy Li (李悅彤). Amidst rumors of divorce and broken family relationships, Angelica and Oxide ultimately chose to stay together and let bygones be bygones.

“We have already let it go,” Angelica replied when she was asked to comment on her husband’s infidelity. “It’s the past. Now, we move forward.”

Angelica has just completed HKTV drama The Election, which also stars Liu Kai Chi (廖啟智) and Shek Sau (石修). The Election is Angelica’s first television drama in eight years. Asked if she plans to film more Hong Kong dramas in the future, Angelica said, “That depends on how the results turn out to be!”

Although both Angelica and Oxide are currently staying in Hong Kong, their home is in Malaysia. Asked if Oxide had visited Angelica on set while she was filming The Election, Angelica said, “No, but he did help me with my script reading.” Will Oxide support Angelica to film more dramas? “He has always supported me in whatever I choose to do.”

10 comments to Angelica Lee on Husband’s Infidelity: “Let’s Move On”