Another Smooth “Breakup”, Nancy Wu Is a Fighter 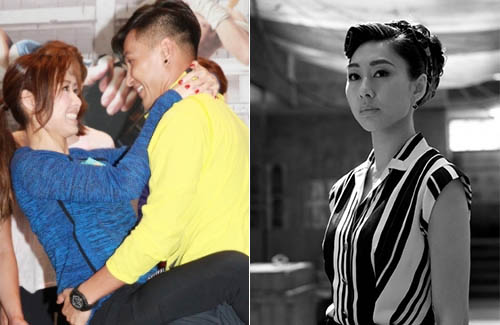 It was a dramatic end for the “NanCo” relationship when Ruco Chan (陳展鵬) confirmed his interests in asking out former Miss HK contestant Phoebe Sin (單文柔). For months, Ruco was linked with Nancy Wu (胡定欣), who he was rumored to be dating after A Fist Within Four Walls <城寨英雄> defined the summer season last year.

Whether or not the “NanCo” relationship was legit—or just for PR—Nancy is coming out as the loser in love once again. Her love life has always been as difficult and complicated as her road to stardom: in the first few years of her debut, Nancy dated Deep Ng (吳浩康), who later broke up with her for Jacqueline Ch’ng (莊思敏). Nancy then dated Kenneth Ma (馬國明), which also ended with a split. Her relationships with Patt Shum (沈柏淳) and Terry Chan ((陳明道) ended after a few years.

When Ruco finally showed up, shippers got excited. Hearing the fans’ call, Ruco and Nancy went for ambiguous responses about their rumored relationship, which left room for the imagination. Fans got so deep into their pseudo-relationship that not many of them were able to accept Ruco’s new possible romance with Phoebe. Things got really ugly between the two fandoms, both sides suffering attacks. Ruco became “the cheater” and the subject of a death hoax. Nancy was accused of using Ruco for attention.

But is Nancy really the loser in all of this? Nancy’s been through breakups before. She has been called a problematic, attention-seeker Kong girl (港女) since as early as her days with Deep. Getting negative remarks about her love life is nothing new for her. She’s suffered through ten long years as a B-list before she made it big with Ghost of Relativity <鬼同你OT> in 2015. None of her breakups had sloppy ends, all handled with class.

35-year-old Nancy is a fighter. An experienced survivor. A little make-believe breakup is not going to put her down—in fact, she might even come out stronger than before.

14 comments to Another Smooth “Breakup”, Nancy Wu Is a Fighter