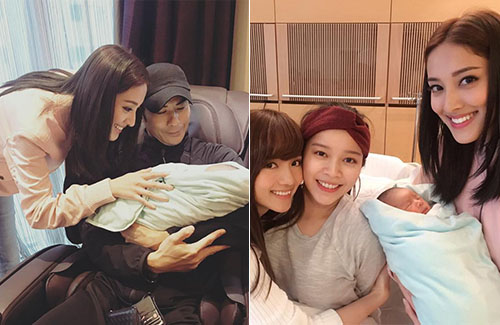 It was actually Kevin Cheng (鄭嘉穎), Winki’s costar in Blue Vines <殭>, who named her son “Marat.” Winki explained, “Kevin said he needs to be manly, so manly that he’ll start growing hair on his chest!”

Many close friends in the industry visited Winki soon after she gave birth, including Sisley Choi (蔡思貝) and Cheronna Ng (吳嘉熙). Both girls always wanted to try changing Marat’s diapers for the first time. Winki also shared a picture of Kevin holding Marat, with his girlfriend Grace Chan (陳凱琳) by his side. Netizens joked that it looked like they were taking a family photo.

At a fashion event a few days ago, reporters drilled Grace Chan about the details of Marat’s birth. Grace revealed that Winki and Marat have already been discharged and resting at home. Mentioning that her picture with Kevin and Marat looked like a family photo, she said, “The baby was six pounds, and they taught me how to hold him. After I held him, Kevin held him, and I stood beside him. That’s when Winki decided to take a picture. It does look very sweet!”

Grace said she would be preparing a D.I.Y gift for her little godson, while Kevin already has a red envelope prepared. As for Winki being in labor for 36 hours, Grace said a mother’s love is worthy for the greatest admiration—if she is to have kids as well, she would definitely consider a natural birth. Asking if she and Kevin are already planning for marriage, Grace said, “Not yet. Take it one step at a time.”