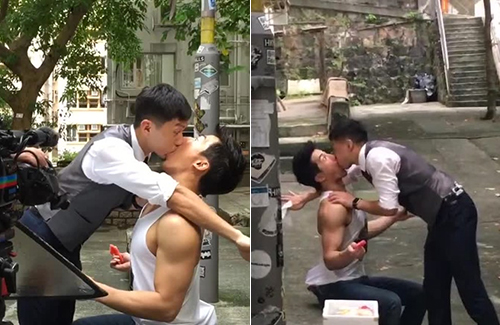 Benjamin Yuen (袁偉豪) and Arnold Kwok (郭子豪) are sending fangirls to a frenzy with their open-mouth kiss in the upcoming TVB drama, Three Women, One Gene <三個女人一個「因」>.

The two male leads, who star opposite Mandy Wong (黃智雯) in the upcoming romantic drama, did a silly kissing scene that involved some smelly durian and cheese. In the scene Arnold, who dreams to be a celebrity, is struggling to deliver a particular expression for the camera. To help him, Ben recommends him to eat some watermelon and durian so he can make an exaggerated expression. To his misfortune, Ben accidentally slips and lands on Arnold. Their lips lock tightly.

After the scene, Ben and Arnold laughed and yelled out cries of help. The rest of the cast and crew also pulled out their mobile phones to film the hilarious scenario. For different camera angles, Ben and Arnold kissed two more times. Ben accidentally knocked into Arnold’s teeth during their second kiss.

“Arnold ate cheese and watermelon and durian for the scene,” said Ben. “I really cannot stand durian, but I held my breath and went for it. I can’t believe I kissed a guy before I kissed the female lead!” (Will you have a kissing scene with Mandy?) “I don’t know yet!”

How did Ben prepare for his kissing scene with Arnold? He laughed and said, “There’s no need to prepare! I just went for it! But it did get the staff really hyper!”