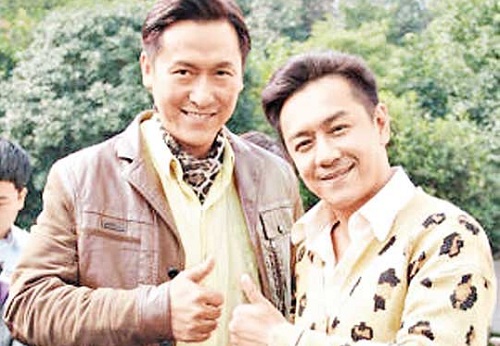 Several days ago, 19-year-old Rose Chan (陳嘉桓) was forcibly kissed and touched inappropriately by veteran actors, Benny Chan (陳浩民) and Joe Ma (馬德鐘)at a restaurant in Hengdian, China. The news shocked the entire city of Hong Kong! Yesterday, Rose was summoned back to Hong Kong immediately, appearing tearfully at a press conference and filed a police report over the sexual harassment incident. Benny Chan flew back to Hong Kong with his pregnant wife, while Joe Ma donated money to charity to extricate himself from the incident!

Yesterday, Benny and his pregnant wife, Lisa, returned to Hong Kong in a low-profile manner to await the impending birth of their baby. To avoid the paparazzi, Benny and Lisa flew from Hangzhou to Shenzhen and then took a car ride back to their Hong Kong apartment. The trip was extremely long and uncomfortable for the pregnant Lisa.

Benny’s original plan was to return to Hong Kong after filming his mainland series, spending between 7 to 10 days to accompany Lisa during the birth of their baby. Unfortunately, the scandal of Benny’s sexual harassment over Rose Chan broke, which did not allow Lisa to await the baby’s arrival peacefully. Last night, a large group of reporters awaited Benny outside his apartment in Hong Kong, but he did not make an appearance.

Benny’s manager, Charlie Lam (林查理), spoke to the Oriental Daily, “I forbid Benny from leaving his apartment. He needs to reflect upon his actions.” (How did Lisa react to Benny kissing and groping Rose Chan?) “Of course, Lisa blamed Benny for causing a ruckus after drinking, but she realized that he did not intentionally take advantage of Rose. Thus, Lisa forgave Benny.” Charlie explained that Benny felt unhappy and agreed to reflect deeply upon the incident.

In an interview with I-Cable, Charlie said, “Benny is to blame, but he did not intentionally take advantage of Rose Chan. After Sin Kwok Lam (冼國林) and Rose calm down, Benny will personally apologize to them.” In an interview in Shanghai with the mainland media, Benny expressed that despite his hectic work schedule, he must find the time to exercise to continue his healthy image.

On the other hand, Joe Ma attempted to extricate himself from Rose Chan’s harassment incident. In the early AM hours yesterday, Joe drew clear lines from his good friend, Benny Chan, on his blog. Joe wrote, “The incident the other night may be attributed to Benny’s misconduct after drinking too much alcohol. I also regret that I did not stop the harassment immediately. My method of consoling Rose Chan also caused misunderstanding. In this respect, I need to apologize to Rose. I have already explained this matter to Rose and Sin Kwok Lam and have received their understanding.”

One minute later, Joe Ma left another message on his blog, expressing his intention to donate money to charity to “resolve” the situation. Joe wrote, “Due to the public unrest aroused as a result of this incident, I am ready to follow Sin Kwok Lam’s benevolent and charitable actions. I will donate funds to the Tung Wah Group of Hospitals and give back to the community and benefit society.” Joe’s message regarding charitable donations aroused an extreme backlash from the entertainment industry. At noon time, Joe rushed to delete the critical comments.

At 4 PM yesterday, Virginia Lok’s (樂易玲)plane arrived at the Hong Kong airport. Asked if she had learned about Joe Ma’s involvement in sexually harassing Rose Chan, Ms. Lok said, “Recently, I have been busy organizing the upcoming Miss China International pageant and did not learn of the incident until I read the newspapers on the plane.” Ms. Lok indicated that she will contact Joe Ma later to understand the situation further. Jayne: To express their sincerity, I think Benny and Joe should appear in a televised interview and apologize to Rose, their wives, and the public for their unscrupulous behavior. Benny hiding behind his manager and Joe hiding behind his blog do not make them sound sincere in their apologies.