Bernice Liu‘s (廖碧兒) love life has always been colorful. Aside from dating actors Hawick Lau (劉愷威) and Moses Chan (陳豪) in her early career, the 41-year-old actress has turned her interest to successful businessmen in recent years. After a short relationship with billionaire Richard Li‘s (李澤楷) cousin Alastair Lam (林忠豪), Bernice has been involved with wealthy businessman Calvin Lo (盧啟賢) in the last two years. 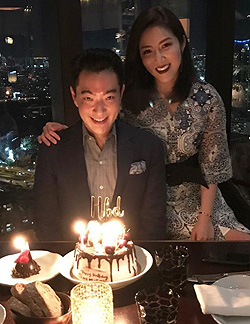 The couple’s relationship was exposed after Bernice was spotted vacationing with Calvin in Finland in 2018. However, Calvin was already in a seven-year relationship with Thai heiress Nina Bencharongkul and didn’t have a clean break with her while dating Bernice. With allegations circulating that Bernice was the third wheel, she announced she and Calvin broke up in 2018.

While Bernice claims to have already ended their relationship, recent reports suggest that she is still seeing Calvin in secret. The couple allegedly spent Valentine’s Day together. Besides showcasing a large bouquet of 99 roses on her social media, the actress was seen having dinner with Calvin and his daughter from his first marriage at a five-star hotel as well.

In an open rivalry with Nina for the past two years, Bernice was never secretive about being seen with Calvin. Aside from travelling to France with Calvin twice and having thrown birthday parties for him, Bernice often shares photos of the two on her social media.

A close-up photo of what Baby Joshua really looks like!