Admitting dating 40-year-old insurance CEO Calvin Lo (盧啟賢) in March, 39-year-old Bernice Liu‘s (廖碧兒) romance was destined to be troubled from the start. While dating Bernice, Calvin was unable to have a clean break with ex-girlfriend, Thai heiress Nina Bencharongkul. Although Bernice trusted Calvin and continued to defend him, the couple ultimately broke up. 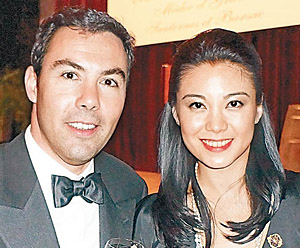 Tabloids claimed that Bernice’s romance with Calvin was just a smoke screen, distracting others from her secret four-year marriage with French vineyard owner, Charles Cazes, which has ended in divorce. The pair was romantically linked together in 2014 and Charles had alleged gifted Bernice with a multi-million-dollar vineyard in France.

Bewildered by the recent reports, Bernice cleared up the rumors on Instagram. Although she denied ever being married, Bernice admitted that her relationship with Calvin has ended.

“Many of u know that I don’t really talk about my personal matters but seeing the news lately, I feel it’s time I said a few words… First of all, I am not married and have never been married. Currently, I spend a good deal of my time alone. Relationships are difficult, I tried my best but as relationships are about two people, I was unable to make things work due to differences in expectations in a relationship. Hence, I have chosen my own adventures. We have had many great memories and will always remain close friends. I thank him for his care & support. Thank u to all my fans, friends, management, & family for being by my side & loving me unconditionally. I trust and believe in God’s plan for me….”