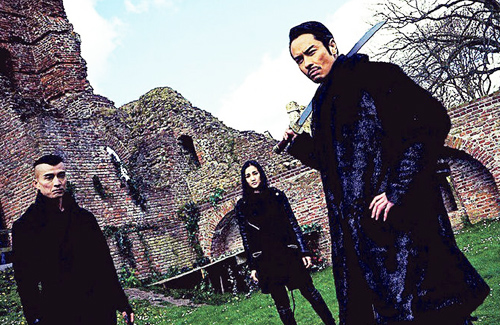 The press caught up with Kevin at the Hong Kong International Airport last week when he was boarding his flight to the Netherlands. Stating there was no awkwardness with Grace, Kevin responded to media labels over the alleged “father-daughter romance” due to their 21-year-age gap. He said, “I don’t care too much about what people are writing. The same goes for what people think.”

Grace responded that age is not an important factor in dating, as she has friends who have fulfilling relationships despite their age gaps. Grace said, “The most important thing between two people in a relationship is comfort and compatibility.” Asked what is an acceptable maximum age difference with her boyfriend, Grace said, “I’ve never thought about it. Even if the female is older than the male, it is still okay.”

After Grace was spotted entering Kevin’s home in early April, the pair did not deny possibilities of developing further. At the same time, it was reported that Joel Chan and Wong You Nam (黃又南) are also fervently pursuing Grace. She calmly said, “[Since I] know it’s not the truth, then there’s no need to worry about it. I will just continue working as per usual.”

Earlier, a recorded dialogue between cast member Anjaylia Chan (陳嘉寶) and her boyfriend were leaked. The couple was discussing religious-based issues and pre-marital sex with the Blue Veins cast. In regards to the leaked conversation, Kevin explained, “Actually, the discussion was not scandalous. I’m extremely respectful of each person’s personal beliefs and religion. Don’t use it to make up news stories. These things can be hurtful.”

Kevin Cheng Admits Grace Chan Visited His Home “to Only Borrow DVDs”
By huynh on April 3, 2015 in Hot Gossip!, NEWS Edit this entry

Kevin Cheng Admits Grace Chan Visited His Home “to Only Borrow DVDs” 1321 10 3 Share1
Although 45-year-old Kevin Cheng (鄭嘉穎) has expressed his desire to place romance on the side and focus on work, he has reportedly been secretly dating his Blue Veins (殭) costar, 23-year-old Grace Chan (陳凱琳) for two months.

Grace was recently spotted entering Kevin’s residential building. Later, Kevin walked through the main lobby. After staying home for more than one hour, he left in a car with another passenger.

Residents claim that they have sighted Grace within the building previously, but have not seen Grace and Kevin together simultaneously.

An insider said, “Grace is not only pure and true, but she is also a good girl. Everyone knows that Kevin is a man of few words. When he saw how clever and behaved Grace was, he started to talk more. Grace also likes mature men, so they ended up dating!”

In response to the news, Kevin admitted that Grace had indeed visited his home. “We began filming around two months ago, so did we begin dating immediately? Actually, I have moved there a little more than a year ago, so it is not a love nest. Thank you for everyone’s rich imaginations.

“That day, I had to continue working after attending an event with FILMART. I previously had a conversation with her about films. She is very motivated and likes to watch movies and see where she can improve. I have a large DVD collection, but I had to work and wasn’t at home. I thought if she wanted to borrow it, just go to my house and get it, since I have a maid to open the door anyway. It’s really just that simple. Don’t think too much into it.”

When asked whether he possessed any romantic feelings for Grace, Kevin responded, “Right now, it is just feelings of friendship. We are currently just friends. Everything starts from friendship, but you can’t really say it like that. Currently, we are just friends and colleagues.”

Despite their 20-year-age gap, Kevin does not believe age is an issue. “I don’t consider this factor. What’s important is whether [we] can communicate and about the right timing.” Kevin further stated that he will not feel awkward when he bumps into Grace.

11 comments to “Blue Veins” Cast Films in the Netherlands