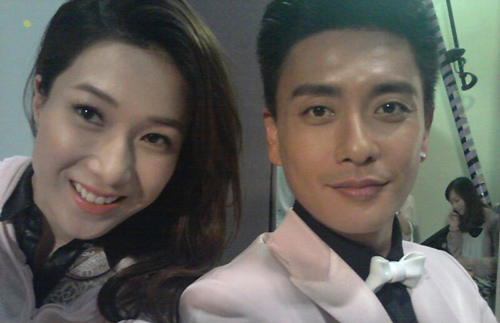 After a two-year hiatus due to budgetary cuts, TVB decided to resume its calendar shoot. The shooting for the 2013 calendar has already begun, with a star-studded list of celebrities to please the fans!

In the January month, Bosco Wong (黃宗澤), Linda Chung (鍾嘉欣), Raymond Lam (林峯), Aimee Chan (陳茵媺), and Kate Tsui (徐子珊) will be featured. Bosco did not feel that the calendar placement meant heavy promotion for him.  “Every month is important. Of course, I am happy to have the opportunity to film for the calendar.”

Due to the popularity of Witness Insecurity <護花危情>, the pairing of Bosco and Linda was well-received by the audience. Bosco indicated that he would like to partner with Linda once again.

Linda added, “Although we are not a real-life couple, it is good that the audience liked the pairing. I am very lucky; I had partnered with Raymond Lam on many occasions and now there is a refreshing feeling with Bosco. In the coming year, I would like to have more partnership opportunities as onscreen lovers.”

In the month of February, Michael Miu (苗僑偉), Roger Kwok (郭晉安), Michael Tse (謝天華), Tavia Yeung (楊怡), and Fala Chen (陳法拉) will be featured. The status of the artists were apparent as they will be placed during the festive Lunar New Year holiday. Michael Miu joked, “I lost out. February only has 28 days!” Asked if it has been two years since TVB has its last calendar shoot, Michael replied, “I do not remember. It’s a good thing, with a new boss on board now. On the day of filming the calendar, I was working and asked urgently to return for the shoot. I was unaware of the arrangements for the calendar.”

Roger Kwok added that the TVB calendar was a highly prized commodity by many. “The calendar production has been halted for two years, which made me uncomfortable while sitting and eating! The TVB calendar is very representative. Each time, it is shot beautifully and with great care.”