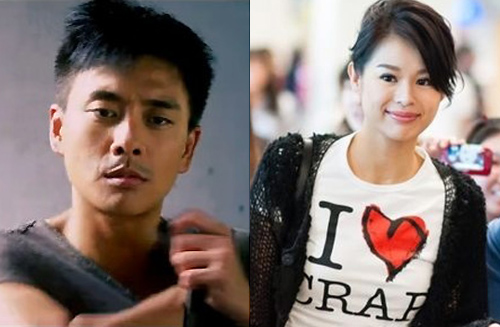 It has been nearly a month since Myolie Wu (胡杏兒) and Bosco Wong (黃宗澤) announced their shocking breakup to the world. Alhough Myolie seems to be ready to put their breakup behind her and start anew, Bosco is apparently still longing for reconciliation.

Earlier, tabloids reported that Bosco lost about 15 to 20 lbs after leaving Hong Kong to Taiwan for the filming of mainland Chinese drama, The Woman Above the Bread Tree <面包树上的女人>. During his stay in Taiwan, he reportedly sent at least 50 text messages to Myolie daily, hoping to patch up their relationship. Oriental Sunday also alleged that Bosco plans to propose to Myolie with a 3 carat diamond ring once he returns to Hong Kong.

On the night of August 15th, Bosco was seen returning to his hotel after an entire day of filming. The actor was asked if he still missed Myolie, in which he replied with a slight nod. When asked about his sudden weight loss, Bosco admitted, “I work long hours every day, and I’m not done until the end of the month!” Before the reporters could ask more questions, Bosco expressed that he had nothing further to comment, and quickly exited into the elevator.

To prevent new rumors from sprouting, Bosco hired a male driver and a middle-aged female assistant for his one-month work trip in Taiwan. For the past few weeks in Taiwan, Bosco diligently went to work every day, and was never seen leaving the film studio unless work was done for the day. He had his assistants order takeout for him for lunch and dinner, and on filming breaks, the actor would sit at the side and fiddle around with his phone instead of socializing with the rest of his colleagues.

An insider revealed, “He has his phone with him at all times, and he’s always texting, every single day. His messages are usually really long, and sometimes he would ask us how to write certain [difficult] characters. I think he’s writing a letter of apology to his girlfriend!”

The outbreak of Boscolie’s breakup had dramatically different outcomes for both parties. When Bosco was reported to have been depressed and morose over their lost relationship, Myolie was reported to have become a popular target for everyone, winning the affections of TVB siu sang, Kenneth Ma (馬國明), and Taiwan TTV’s “Big Brother” Eric Huang (黃少祺).

According to Oriental Sunday, Bosco was perturbed with Myolie’s rumors with Kenneth and Eric, which prompted him to buy a 3 carat diamond ring to propose to Myolie as soon as possible. Another insider revealed, “Bosco gave Myolie many gifts, but never a ring. In the past, he didn’t want to settle down so quickly, and insisted that he still had more time. It is different this time. Since he wants to get back with her, he needs to be more sincere about it. The ring represents that he is giving the rest of his life to her.”

Will Bosco be able to win Myolie’s heart back? A close friend of Myolie said, “Myolie knew what she was getting into when she began dating Bosco. She endured things even when she knew it was impossible. Myolie knew she would be unwilling to let him go, so that’s why she was so firm in breaking off the relationship this time. She does not want to go back. I heard Bosco wrote an apology letter to Myolie, promising her that he will correct his flaws. I also heard that he bought a diamond ring to propose to her. I don’t know what Myolie thinks about this, but she seems to be in a really good mood nowadays. I think it’s because she knows Bosco genuinely cares for her!”

Bosco will return to Hong Kong in the end of August after completing his Taiwan scenes for The Woman Above the Bread Tree. Will Bosco be able to patch up his relationship with Myolie?

On August 19th, during a recording for The Million Dollars Primary School <百萬小學堂> variety show in Taiwan, Eric Huang responded to his love rumors with Myolie, “We have not contacted each other since we finished filming Jin Yu Man Tang <金玉满堂> in March. The last time I saw her was when we promoted our drama at the Shanghai Television Festival in June. Where did these rumors come from?”

Eric continued, “She had a boyfriend when we were still working together, so I didn’t really think of anything else. I didn’t even know they broke up until I read the news!”

73 comments to Bosco Wong Buys a 3 Carat Ring to Propose to Myolie Wu?