Bosco Wong Reacts to Myolie Wu’s Baby News: “I’m So Happy For Her” 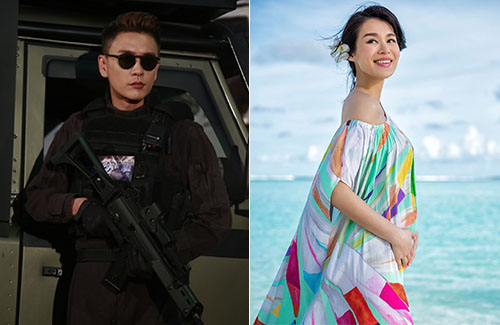 Bosco Wong (黃宗澤) reacted with nothing but joy when he was asked to comment on ex-girlfriend Myolie Wu’s (胡杏兒) exciting baby news. Myolie, who Bosco split with in 2012, announced on Mother’s Day that she is expecting her first child with husband Philip Lee (李乘德).

At a blessing ceremony for his new television web drama Flying Tiger <飛虎極戰>, Bosco immediately responded with joy when he was asked to comment on Myolie’s baby news.

“Congratulations! I’m so happy for her,” he said. “I hope the baby grows up healthily and well. If she wants more, then [I wish her] two babies within three years!” (When will it be your turn?) “I really have no time to think about that right now.” (Have you messaged Myolie?) “Not yet. I’m terrible.”

Both playing SDU paramilitary officers, Bosco and Ron said they have been working out together, but haven’t yet achieved that ideal “mermaid line” (V-cut) yet.

“I’m still working on it,” said Ron. Bosco added, “I have a ‘goldfish line’ instead. I think Michael Wong is the fittest one out of all of us.”

Ron stressed that while having a fit body is good, it is important to have good endurance for their roles. Bosco expressed, “I think having good endurance is more important. For the role that we’re doing, it’s required.”