Carina Lau Plans On Opening Her Own Production Studio 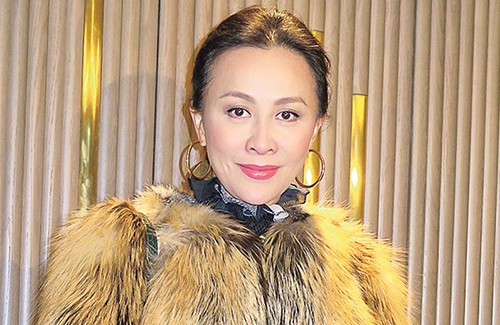 Carina Lau (劉嘉玲) attended the grand opening of her friend’s new restaurant, where she told reporters her plans about starting her own film production studio.

The 51-year-old Detective Dee <狄仁傑> star, who has her own chain of businesses, said she has already transferred the ownership of her restaurant and bar. Eager to expand her acting career, her food businesses were too burdensome for her to manage. She will, however, maintain control over her clothing business, and she plans to develop the business further in Mainland China.

Carina’s future acting projects include Detective Dee 3, reprising her role as Wu Zetian. She is planning on establishing her own film production studio, and intends to invest in and produce several big blockbuster films. She is open to starring in her own works, but she has no interest in directing them.

“Being a director is hard work,” said Carina. “But as a producer, you are able to put your own ideas into your film. There are many stories in my life that I want to tell, and I would like to use my own life as a story blueprint. I’m interested in doing films about female empowerment, or talk about the experiences that people had to go through when they reach a bottleneck.”

Carina is very eager about the idea of hiring her own husband, Tony Leung Chiu-wai (梁朝偉), to star in one of her films, should it be suitable.

“He cannot turn me down!” warned Carina. “The pay will be fair, and there’ll be bonuses. If I am to hire director Wong Kar-wai (王家衛), then I’ll make sure to specify in the contract that filming has to be completed within the time frame so we don’t waste money!” She then joked that she would not bother to add in a specified time of rest for her husband in the contract, saying, “It wouldn’t matter if he didn’t go home.”