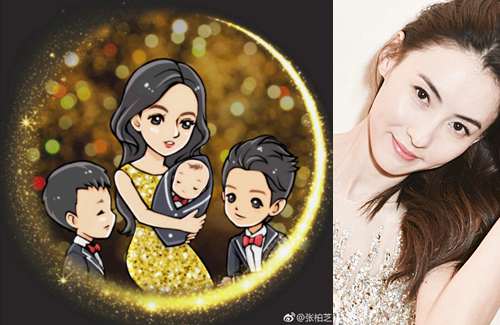 Cecilia Cheung (張栢芝) has remained silent since news surfaced that she gave birth on November 25, which caused many to start doubting if she truly had a third baby. However, yesterday, Cecilia’s studio finally confirmed on social media that the 38-year-old actress did give birth to a baby boy in November.

Though she did not divulge any further on why she kept her pregnancy and the identity of the child’s father a secret, Cecilia positively addressed that she will work hard to create a better future for her children and bring forward better projects for everyone.

The Weibo post read: “Children and family are always the most important people for Cecilia to protect, so in the coming days, she will do the best she can to create a better quality of life for her children to grow up in. Cecilia will also be diligent and work hard in bringing better projects for everyone. The little prince is a month old now, and we are so thankful for everyone’s blessings!”

Several fans had left congratulatory messages and blessings for Cecilia and some commented that they hope she would give birth to a girl next time, so that she can inherit Cecilia’s beautiful looks.

However, the sudden confession had many confused as to why Cecilia did not openly address the matter when she made two physical appearances post-partum. It had even appeared that she wanted to cover-up the truth. Her good friend, Bonnie, had even denied Cecilia gave birth.

With no disclosure on the father’s mysterious identity, discussions on his identity continued. Along with the rumored father being a 65-year-old wealthy Singaporean businessman of elite status and a shareholder of a large food conglomerate in Singapore. There are also reports that claim the father is a Mainland Chinese billionaire instead.