Cecilia Cheung (張柏芝) reportedly gave birth to a baby boy on November 25 and is currently resting at the Hong Kong Sanatorium and Hospital. The news came as a shock, as there were no photos of Cecilia’s pregnant state prior to giving birth. The baby’s father is rumored to be a 65-year-old wealthy Singaporean businessman.

The 38-year-old actress has two sons, 11-year-old Lucas and 8-year-old Quintus, with ex-husband, Nicholas Tse (謝霆鋒). After the pair divorced in 2011, Nicholas reignited his romance with ex-girlfriend, Faye Wong (王菲) and resides at the couple’s Beijing home. While occasionally rumored to be dating, Cecilia spends most of her time raising her two sons in Singapore.

Let alone her pregnancy, Cecilia even kept the identity of her new man low-profile. But in a guest appearance on a variety show in March, Cecilia’s mother slipped that Cecilia’s boyfriend is a 65-year-old Singaporean investor who has shares in multiple restaurant chains, and has a publicly-traded enterprise. Despite their 27-year age gap, the man takes very good care of Cecilia.

In February, Cecilia hinted at her pregnancy in an Instagram post, “Too cute! I’ll definitely have a baby before the end of 2018! This is my goal!” Fans thought Cecilia was joking and didn’t take her seriously. Cecilia has disappeared from the public eye since May, when she had attended a press conference to promote her Mainland drama, Love Won’t Wait <如果，愛>. Her family has been very tight-lipped about her pregnancy and no one leaked anything to the press.

However, news of Cecilia giving birth surfaced today. When her mother was spotted at the hospital, reporters asked if she was there to visit Cecilia. But she replied, “No, I’m here for a check-up,” before quickly turning away.

Nicholas was similarly curt when asked if his ex-wife had given birth. He said, “I don’t know.” But it was reported that Nicholas had run into Cecilia and her boyfriend at a function earlier.

When reporters reached out to Cecilia’s manager, Emily, she didn’t directly deny the news. She said, “I have no response!” 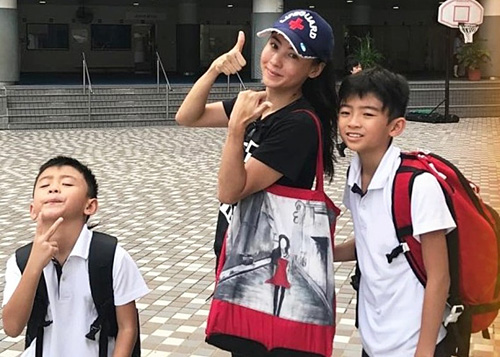