By addy on October 4, 2012 in Celebrity Weddings, NEWS 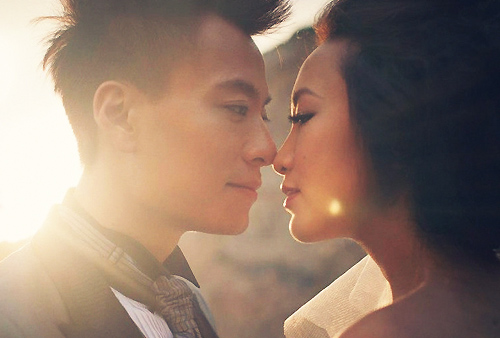 After holding their traditional Chinese tea ceremony in the morning – in which the couple knelt down in front of their parents and served tea – Tisha and Otto’s wedding took to the streets in the late afternoon. Tisha wore a sleeveless red qipao with gold trimmings, while Otto wore a gleaming black tuxedo with gold linings and a red and gold bow tie. After saying their blessings to each other in front of a large crowd of guests, reporters, and onlookers, Otto carried Tisha to a military truck that was parked down the street. Along with the maid of honor and groomsmen Johnson Li (李思捷) and Matthew Ko (高鈞賢), the newlywed couple took a journey around Tsim Sha Tsui on the military truck that carried the words, “Just Married.”

The couple originally planned to spend at least a seven-figure sum for the wedding, but due to various sponsorships, the costs dropped to a six-figure sum.

Tisha’s parents, Law Lok Lam and former actress Chan Bo Yee (陳寶儀), were very emotional at the wedding. Asked if she had already strictly “instructed” her son-in-law, Chan Bo Yee said, “Otto takes care of Tisha really well! It’s time to hand my daughter over. They are in the next step of their lives. They are in their own world now.” Regarding grandchildren, Chan Bo Yee said, “Not so soon! The world is a mess right now. Let’s wait until [Tisha and Otto] are more mature.”

In most Chinese weddings, the groom, the bridesmaids, and the groomsmen play various games, in which the groom has to earn his way to unlock doors at the bride’s house to finally see his beloved. One of the games is to force the groom and his groomsmen to eat terrible-tasting food. Asking if Otto had suffered a lot in these games, Matthew laughed, “The food wasn’t that bad! The bridesmaids originally wanted to play with Jonathan!”