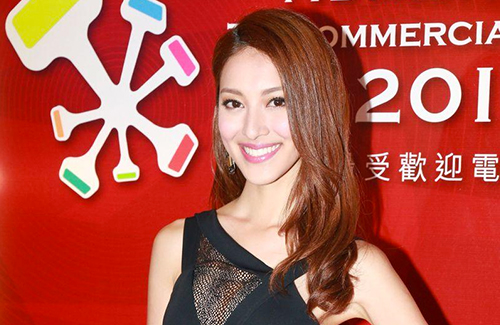 Kevin Cheng (鄭嘉穎) and Grace Chan (陳凱琳) have finally gone public. In a press conference for the Mainland Chinese drama Tai Chi Master: The Door of Tai Chi <太極宗師之太極門>, the 45-year-old Kevin happily admitted that he is dating the 24-year-old Grace, who he met on the set of TVB’s vampire drama Blue Veins <殭> earlier this year.

“The phrase I’ve been saying the most recently is ‘please give us some space,’ but my friends in Hong Kong don’t seem to understand what that means,” said Kevin.

The Hong Kong media has been following Kevin and Grace since late March, after Grace was spotted visiting Kevin at his residence. Since then, Kevin and Grace were seen together on numerous occasions, eventually forcing the celebrity couple to be more open about their relationship than they originally intended.

A day after Kevin’s announcement, Grace attended an event for TVB as an MC, where she openly admitted that she is dating Kevin. The former Miss Hong Kong added that she hopes that they will have even more time to get to know each other better, and asked the press to give them more space for development. On how it was like to date Kevin, she said, “We talk about everything. We have tacit understanding.”

Rumors were spreading that her father was angry that she had spent the night at Kevin’s house. Her father was also against their relationship. Grace clarified, “My father already knew about us. I am close to my father and we have no problem with each other.” Asking if it was true that her father does not allow her to spend nights at Kevin’s place, she said, “This is a personal matter.”

Kevin’s former girlfriend Charmaine Sheh (佘詩曼) was originally invited to the same TVB event, but she later turned down the invitation because she had fallen ill. Grace said, “I hope she gets well soon!”

Does Grace think that Charmaine is trying to avoid her? “She is also a friend. I never thought about this.”

Charmaine’s spot was replaced by Kate Tsui (徐子珊). Kate said she does not mind being a last-minute replacement, and has already sent her regards to Charmaine through her manager. Asking Kate if she believes that Charmaine is trying to avoid Grace, Kate appeared shocked and confused. After telling her that Kevin and Grace decided to go public, Kate immediately laughed. “You guys have such fantastic imagination.”

9 comments to Charmaine Sheh Avoids Being Seen with Grace Chan?