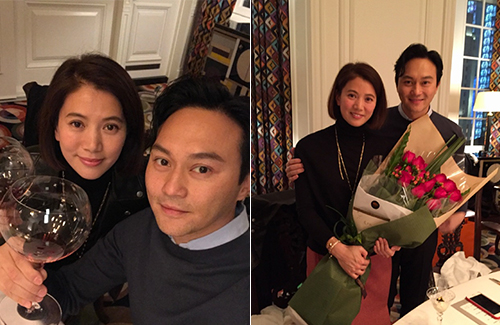 February 8 was Julian “Chilam” Cheung (張智霖) and Anita Yuen’s (袁詠儀) 16th wedding anniversary. Rather than spending it together as a couple, Chilam and Anita brought along with them their son, 10-year-old Morton, and a band of close-knit friends to a restaurant to celebrate the occasion.

Halfway into their dinner, Chilam suddenly showed up with a bouquet of flowers, and presented them to Anita in front of their friends. He also gave her a card, which read, “Dearest wife, there’s always you.” The phrase was a pun on the words “one six” (always) and their variety show, With You All the Way <一路上有你>.

Anita shared Chilam’s gift on her social media account, saying, “So shocked! Mr. Cheung actually gave me flowers. I am so happy I could fly. Thank you to the friends who have witnessed our 16 years for celebrating it with us. Thank you.”

In a later interview, reporters asked Chilam if he gave Anita anything else besides flowers and card. He said, “Nope! That’s it. It’s the thought that counts, not the gifts. It’s actually not much of a surprise. We hung out with our friends, and I didn’t even try to hide the flowers. I gave them to her once I saw her.”

Asking Chilam if he had anything else he wanted to say to Anita, he said, “Tell her to forget about it (shut up)!”

Anita said, “There are many things you can do with that. I would tell him to shut his wallet and don’t buy so many cars.” As for her thoughts on receiving flowers from her husband, Anita said, “It’s like winning the lottery! He rarely does this. I’m so touched. I seriously was not expecting it.”