Chilam Cheung: “I Won’t Give in to Temptation and Risk My Family Life!” 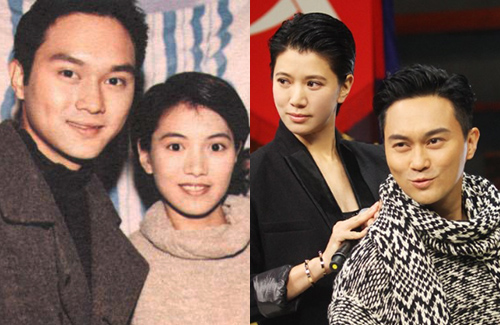 Married to Anita Yuen (袁詠儀) for over 13 years, Chilam Cheung (張智霖) openly discussed their happy marriage and how their son, Morton, completes their lives. Pegged as a perfect couple, Chilam truthfully revealed that his relationship with Anita is fairly ordinary but blissful. While the 42-year-old actor still sends young women’s hearts racing, he will not give in to temptation and risk losing his happy family life.

Last year’s role as Captain Koo on Triumph in the Skies 2 <衝上雲宵II> helped Chilam gain a lot of popularity in Mainland and receive many opportunities. Although he has to travel to Mainland more frequently for work now, Chilam is not afraid of the tempting women there. He jokingly said that everyone in Chinese speaking society knows he is already taken. Chilam also added that Anita is the prettiest Miss Hong Kong winner in his eyes.

“Even if there were [women interested in me], I don’t think I’ll break up my family for a moment of enjoyment. Especially after having a child, [Morton] has given me a lot of happiness. This kind of happiness can’t be exchanged for one moment of passion,” Chilam rationalized. “I will not say, ‘Wah, that girl is hot!’ If I were to look at her, will I feel very satisfied? No, because I’m already very emotionally satisfied [with my family].”

Similar to every married couple, Chilam and Anita have disagreements and problems, even in the smallest and most trivial matters. Calling it an act of fate – Chilam embraced his marriage with Anita naturally. After Morton was born, their marriage bond was strengthened further.

Setting an Example for Morton When Morton was younger, Chilam and Anita did not intentionally tell him that they were actors. Chilam shared a humorous story, “During the kindergarten interview, the teacher asked what his dad’s job was. Morton answered, ‘He makes sushi’. That’s because he was watching The Rippling Blossom <魚躍在花見> at the time and thought I was a sushi chef. Now that he’s older, there are no longer such amusing misunderstandings!” As Morton grew up, he eventually realized their professions.

In many families, one person usually plays the role of the strict parent. However, with Morton, Chilam’s mentality is to go with the flow. Since children are young, nothing should be set too rigidly because their choices will change in the future. Morton is currently enrolled in an international school and takes enrichment classes in swimming, arts, and English. Chilam will sometimes take him out of the extra classes to give Morton a break from his hectic schedule.

Morton is a very active and mischievous boy, which reminded Chilam about his own childhood. Chilam would often come home with bruises on his body because he enjoyed jumping from high places. But as a father, Chilam makes sure that he sets a great example – he quit smoking and developed better sleeping habits.

After signing a new management contract with Stephen Siu, Jr. (蕭定一), Chilam’s work schedule has been packed. Currently training hard to get his body fit for his upcoming concert in July, Chilam admitted that he felt he has been too busy lately. “I’m the type of person who likes to work and take a little break. When I stop for a moment, I can regain back some feeling. I don’t want to continuously work and become numb. It’s necessary for an artiste to have a life, and his temperament will be different.”

24 comments to Chilam Cheung: “I Won’t Give in to Temptation and Risk My Family Life!”