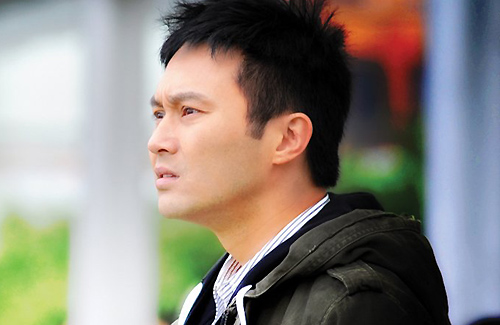 Chilam Cheung (張智霖) attended an event to promote the Hong Kong branch of the Hackett London brand last week. When discussing Kevin Cheng’s (鄭嘉穎) injury for the Ip Man <叶问> television drama filming, Chilam revealed that he too had injured himself multiple times when filming.

Chilam said, “I have suffered from similar injuries before. Actors like us are very passive. Having a broken leg was my most serious injury.”
Chilam revealed that while he was filming for an explosion scene ten years ago, some debris grazed over his right eyebrow and it left behind a serious scar. Aside from explosions, the scene being filmed was also about Chilam getting beaten. The blood seen in the film was actually Chilam’s real blood from the injuries he sustained in the explosion. After the scene was completed, Chilam was immediately brought to the hospital and he got three to five stitches on his wound.
Chilam’s new romantic comedy film with Annie Liu (劉心悠), Natural Born Lovers <天生愛情狂>, was released on Thursday, October 25, in Hong Kong. Within two days of release, the film earned over $1 million HKD in the Hong Kong box office. Chilam expressed that he is very satisfied with the film’s results, and said director Patrick Kong (葉念琛) is very determined that the film will surpass his previous record set by 2007’s Love is Not All Around <十分愛> and 2008’s L for Love, L for Lies <我的最愛>, which both earned $12 million HKD in the Hong Kong box office.
Chilam joked that his wife, Anita Yuen (袁詠儀), had been very supportive of the film and urged her fans to support the film. She also did not forget to tell the fans to let her know how bad the sex scenes were between Chilam and Annie!
Source: Oriental Daily