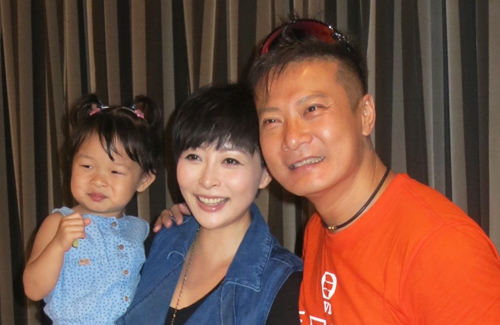 Chin Kar Lok (錢嘉樂) and Angela Tong (湯盈盈) welcomed the arrival of their second child today, delighting their elder daughter with a baby sister. The baby weighed 6 pounds 15 ounces and was named Kassidy.

Attending an event for the Hong Kong Stuntman Association as its Chairperson, Kar Lok happily recounted the events leading up to, and during, the birth of his baby daughter. Kar Lok described how he was abruptly awoken by Angela in the early hours of dawn, “She said, ‘This is it!’ So I immediately brushed my teeth, grabbed some essentials and drove to the hospital as quickly as I could.”

Kar Lok added that he accompanied his wife throughout the delivery, which was fortunately a very smooth process. He said, “From the time when she woke me up, to when she delivered the baby, only took 1 hour and 17 minutes. She delivered naturally about 45 minutes after reaching the hospital. I feel like this daughter of mine is such a sensible daughter – she must have known that I had the Stuntman Association event today and came out in the morning before the event.”

Angela exclaimed loudly the moment the baby was delivered. Kar Lok was however too nervous to utter any sound. Helping to cut his daughter’s umbilical cord, Kar Lok earned praise from the doctor for being a very involved father and husband. He laughed and said, “Now with another girl in the house, together with my wife, my first daughter, and our domestic helper, we now have four females in the house!”

Although Angela had decided to name the baby Kassidy, the couple has not decided on the Chinese name, which may be selected by Kar Lok’s father.

As for whether Kar Lok would be gifting Angela with diamonds or a property to reward her hard work, he said, “I don’t know…all our property are under both our names, so that doesn’t matter. All I know is that my wife is really brave and has given me two really amazing gifts [the birth of our daughters].”