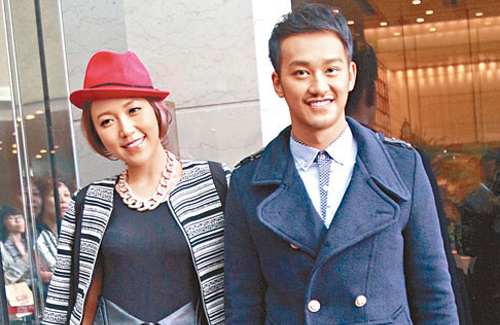 Dating for two years, Deep Ng (吳浩康) and Sherman Chung (鐘舒漫) announced they plan to wed next year. However, Deep was spotted going to dinner and a karaoke bar with two women on February 17. He even kissed one of the women on the lips when she boarded a taxi. Deep initially dismissed the gesture as only a friendly goodbye kiss, but later apologized for his “inappropriate” behavior and promised “to maintain distance from the opposite sex in the future”.

One day before the incident, Deep and Sherman had gone out to the movie theater together. Sherman had complete trust in Deep and praised him as good husband material. After the couple started attending church together, Deep promised to quit smoking and drinking and lead a more healthy lifestyle.

When Sherman was alerted of Deep kissing a curvaceous woman on the street, she admitted she was shocked, but will ask him about the incident. Sherman said, “I can only confidently say that Deep has a positive attitude towards work and in life, which I will support.”

Asked whether the couple will get married, Sherman replied carefully, “We have discussed it; which woman does not want to get married? However, it’s in the distant future, as I want to focus on my music career now.”

Through his Facebook account, Deep apologized for kissing another woman behind Sherman’s back. Deep wrote, “The woman involved in the incident is a friend whom I have known for years. It was my intention to see her board the taxi as a friendly gesture. Despite this, my behavior was very inappropriate. I sincerely apologize to Sherman, her family, and my management company. Sorry, because of my behavior, I made [Sherman] feel emotionally troubled and pressured. I have reflected deeply on the incident and realize that under all circumstances, I should protect the person I love first. I will maintain distance from friends of the opposite sex in the future.”

Despite his apology, it was rumored that Deep had also struggled with fidelity in his past relationships. It was reported that Deep broke up with Nancy Wu (胡定欣) because of Jacquelin Chong‘s (莊思敏) involvement. He casually dated several models before dating Sherman in 2013.

Debuting with great promise as a contracted EEG singer, Deep’s career hit a bump when he was arrested for cocaine possession in 2004. Struggling to make a successful comeback since his drug scandal, Deep formed his own band, Closer. He also teaches Muay Thai boxing and started his own music school.